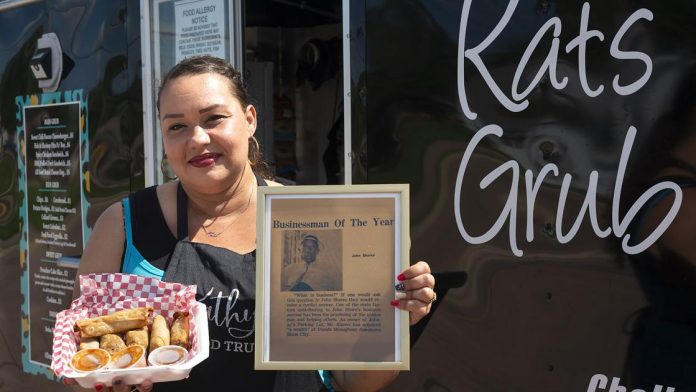 Since then, Kats Grub’s distinctively leopard-spotted food truck has been seen at area festivals and the Morningside public library parking lot, as well as at Mount Zion, 1421 Geneva St. For a complete rundown of locations, go to Facebook.com/KatsGrub.

But don’t miss out on Kats Grub’s cuisine-defying Soul Food Eggrolls. And yes, you did read that right.

“My eggrolls are made with turkey leg meat, cornbread and collard greens,” Pendleton said. “They’re wonderful.”

If for some reason, you’re still hangry from all of that grub, feel free to grab a slice of Pendleton’s Preacher’s Cake, which is made with pineapple, pecans and coconut along with a cream cheese frosting.

“This is the moistest cake you’ll ever eat,” she explained. “A Preacher’s Cake is an old Southern tradition.”

Pendleton admitted that she surprised some of her relatives by pursuing something as risky as a food business. But she believed in herself and saw a need in bringing soul food to Siouxland.

“You can get all kinds of stuff from food trucks, with the exception of soul food,” she said with a smile. “I wanted to change that.”