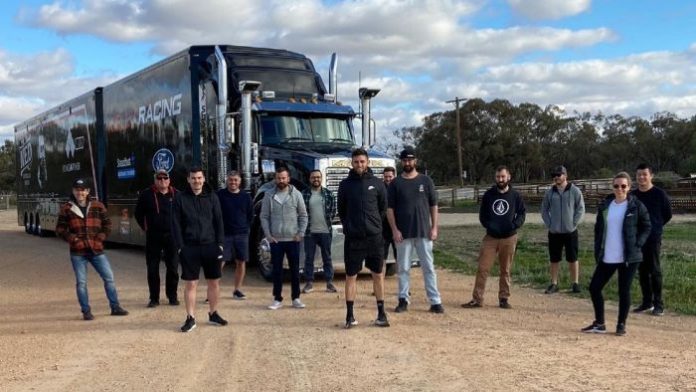 The Kelly Racing Supercars Team is bound for Sydney after fleeing its Melbourne headquarters just before New South Walers closed its border with Victoria.

The team is set to compete in round four of the Supercar Championship, the preparations for which have been completed from a temporary base on a Darling River farm in south-west NSW.

Kelly Racing co-owner Todd Kelly said the team only had about four hours to pack all the gear into the truck and get everyone over the border.

“That was quite a big challenge,” he said.

“The engines were out of the cars, being serviced, and there were parts everywhere.”

Driver Rick Kelly says everyone has been isolating and continuing to work on the cars.

“I think [it’s] the safest and best for everyone concerned,” he said.

“It’s also an amazing location to spend some time — we’ve got crew here that have been in Australia for some time but are from the UK and haven’t experienced the Aussie outback and cooked on the fire and all the great things that we’d love to do at the farm.”

Rick Kelly is currently 12th in the championship, while teammate Andre Heimgartner is 10th.

Rick said teams that could still work from their headquarters would have a small advantage because they could develop their cars in a very controlled environment.

“The tractor shed has been fantastic for us, but we don’t have all the machinery and equipment that we need to press on,” he said.

“We do have enough to bolt the cars back together and put them on the racetrack though, so we’re quite dedicated to that.

“We’ve still got a skeleton crew back at the Braeside headquarters of Kelly Racing and they’re continuing to make parts and send things across as we needed as well, so we’re definitely able to get the job done.”

A year to remember

It has been an uncertain year for motorsport.

In March teams were at the Melbourne Grand Prix when the event was cancelled before they were able to race.

Supercar drivers were then given the opportunity to participate in an e-series of races via computer simulators.

After the border closure last week, Rick Kelly said the 2020 championships needed to be taken one day at a time because the situation was changing.

It is not clear whether the Kelly Racing team will return to the farm in the coming weeks.

Round five of the championship is set to be held in Darwin and round six in Townsville.

Becoming a proactive team leader as a sales manager

A heart-pumping search for spots –