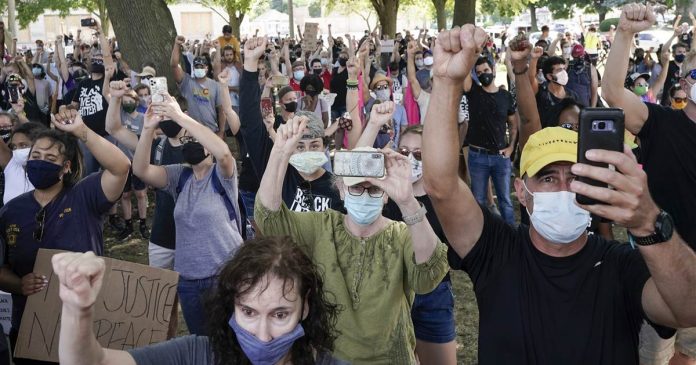 Nine people arrested by police in Kenosha, Wisconsin, for allegedly being outside agitators were in the city to distribute food to protesters, a director of the nonprofit kitchen said Saturday.

Jennifer Scheurle, who serves on the board of directors for Riot Kitchen, based in Seattle, said Kenosha police were mistaken when they arrested the volunteers Wednesday for investigation of disorderly conduct.

“We’re not there to stir up anything,” Scheurle said. “We just want to feed people. We support protesters of any kind.”

The nine were released from jail Friday on about $150 bail each, paid with the help of donations, she said.

The Kenosha Police Department said it focused on three vehicles associated with the group after receiving a tip from a citizen “alerting us to several suspicious vehicles with out-of-state plates.”

Officers and U.S. marshals surveilled the black school bus, food truck and minivan and moved in for arrests when the suspects attempted to fill gas cans with fuel at a gas station, the department said.

The driver of the minivan “attempted to drive away,” Kenosha police said, and when officers caught up with it, they “forced entry.” In video posted to social media and shared by Scheurle, police are seen breaking a minivan window after one officer shouts, “Get the [expletive] out.”

Kenosha police are under scrutiny for the potentially debilitating shooting of Jacob Blake, which set off three nights of violent protests, and for allowing a teenager accused of fatally shooting two demonstrators walk away from the scene.

Police Chief Daniel Miskinis said Friday that he could speak only generally about the incident, saying the people in the minivan were uncooperative and emphasizing the vehicles’ out-of-state license plates. He used the term “shields” to describe the masks found by officers.

“Protective gear found in the bus is just that—protection for working in large crowds, masks for COVID protection,” Riot Kitchen said in a statement. “We reject all claims that our crew was there to incite violence.”

Scheurle said the fuel was to be used for generators for cooking, camping and food production. She said the minivan driver was not trying to flee but was exiting the gas station as police arrived. She also doubted that any illegal substances were found and suggested “residual” marijuana could have been present because the drug is legal in Washington.

She was surprised by the fireworks allegation, saying “We’ve never had fireworks anywhere.”

The ACLU of Wisconsin called on Gov. Tony Evers and Attorney General Joshua Kaul on Friday to order an investigation into potential civil rights violations by law enforcement during the week’s protests.

Riot Kitchen was started after the shooting of George Floyd in May as a way to get free hot food to demonstrators, Scheurle said. The bus is used as a camper for volunteers when they’re on the road, she said.

Possessions, including cell phones, taken from volunteers during the arrests had not been returned and the vehicles were still in impound Saturday, she said.

Dennis Romero writes for NBC News and is based in Los Angeles.

Truck Landing Gear Market – What Factors Will Drive The Market...