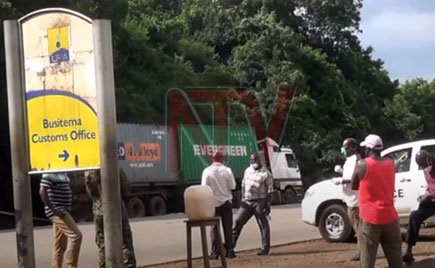 Police and Ministry of Health officials in Busia District are investigating circumstances under which a Kenyan truck driver was found dead in Uganda.
The body of Mr Samuel Kinywa Wangware, 35, a resident of Mathira in Njeri, Kenya, was on Saturday found inside the cabin of his truck at Busitema revenue checkpoint in Busia District by Mr Paul Njoroge, a colleague.
Mr Eriya Elepot, the Busia District Police Commander, said preliminary investigations into the death pointed to natural causes; however, police was working hand-in-hand with medical teams to establish the cause of death.
Mr Njoroge said he had stopped his truck to greet the deceased, only to find him dead.

“I was heading to the Malaba border, saw his truck and stopped to greet him but unfortunately, I found him dead,” Mr Njoroge said.
Sources said the deceased had on Friday evening parked his truck registration number KAT 578T at Busitema checkpoint while heading to Nairobi from Kampala; but was complaining of feeling unwell.

After parking his truck, the deceased was reportedly also seen replacing a faulty tyre, before entering the truck as darkness approached.
Mr Elepot cordoned off the area but had to wait for hours for a team from the Busia District COVID-19 taskforce to arrive as they contemplated the cause of death.
Mr Emmanuel Kibuguyi, a boda boda rider at the Busitema Stage, said they were in ‘panic’ over the death.

“We are fearing this might be Coronavirus that has claimed the life of the driver,” he feared.
A team from the Busia District COVID-19 taskforce led by Dr Yusuf Lule arrived at the scene and first disinfected the truck before gaining access to the cabin where Kinywa’s body lay.

Documents found in the truck suggested that he crossed into Uganda through the Malaba border on June 7 carrying bags of hydrogen carbonate enroute to Kikajo in Kampala.
Dr Lule said the cause of death was still unknown but medical teams and police were working together to establish. No Coronavirus certificate was found in the deceased’s truck either.
“We have not found any Coronavirus certificate with the deceased, but are going to get in touch with Malaba Port health officials to establish his COVID-19 status,” Dr Lule said.

Mr Kinywa’s death comes in the wake of stringent measures by Government’s against truck drivers, aimed at combating the spread of COVID-19.
Mr Paul Mwesigwa, one of the truck drivers, told the Daily Monitor that it was time regional Governments started relaxing some of the restrictions on the truck drivers.
According to Mr Mwesigwa, whereas Mr Kinywa might have not died of COVID-19, he might have died of other illnesses due to failure to get treatment brought about by restrictions which can’t allow them to move out of their trucks even if one is sick.
By press time, the body was taken to Busia Health Centre IV mortuary for an autopsy.

NEWSPORT DAILY-Police appeal for witnesses and dashcam footage in series of...