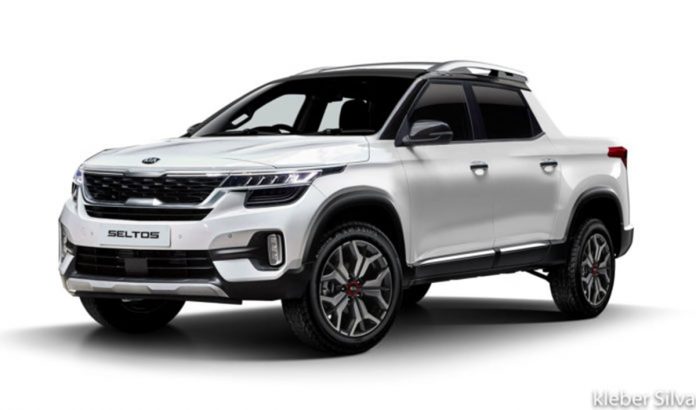 With a few pickup trucks likely in the pipeline for India, here’s a Kia Seltos imagined as a urban pickup by designer Kleber Silva and we think it looks really cool. Do you think we deserve more vehicles with this body style in India?

The Kia Seltos has been a great success in the Indian market and the Korean manufacturer couldn’t have had a better debut product. In just 11 months since it was launched in August last year, Kia has managed to sell as many as 97,000 units of the Seltos since then. If not for the lockdown, the number surely would have crossed the 1 lakh mark. That said, there are no talks of any other body styles based on the Seltos. And that’s interesting because Hyundai is already working on a seven-seater version of the Creta. So why not a Seltos as well?

But that’s a different matter of discussion. What we are talking about here is a little more cooler. In a very interesting turn of events, there seems to be a few pickup trucks in the pipeline for India. Toyota is considering to launch the Hilux pickup in India and even Ford was caught testing the Ranger pickup in India. That’s quite interesting because pickup trucks aren’t a hugely popular body style in India and only product we have on sale in this segment is the Isuzu V-Cross. This has however ignited a talk about pick up trucks in the country.

We thus thought of bringing you this pickup truck based on the Kia Seltos as imagined by designer Kleber Silva. This is only a rendering and a Seltos pickup will likely never be a reality but we must admit that the SUV does look really cool in the pickup body style. The styling of the front end of the Seltos has been carried over and the side profile also looks largely the same up to the rear doors. The rear quarter of the SUV has however been changed with a redesigned C-Pillar and of course a loading bay.

Apart from the glass section at the rear, the rear-end design including the tail lamps, bumper with dual-tip faux exhausts, skid plate and rear reflectors have all been carried over as well. With very little design changes, its surprising how the Seltos still manages to look so cool in a completely different body style. And this was designed to be an urban SUV. The Seltos pickup also gets function roof rails as opposed to the non-function units as seen on the standard Seltos. The roof rails also wrap around the rear with a high-mounted brake light, giving it a authentic truck-like appeal.

Also Read : Here’s What Went Wrong With The Grille of the New Mahindra Thar!

Kia however does not have any pickup truck even in its international lineup. Meanwhile, Hyundai is however working on an urban pickup truck called the Santa Cruz. Its a unibody crossover-type truck that’s based on the same platform as the Tuscon and is expected to make it global debut sometime in 2021. It would thus not be a surprise if Kia too decides to add a pickup truck to its lineup. That said, we would love to see this pickup version of the Seltos become a reality and if this segment really gains some traction in India owing to newer products coming in, we might even see more mainstream manufacturer jump in.

Driving the Polestar 2, the first electric car with a brain...