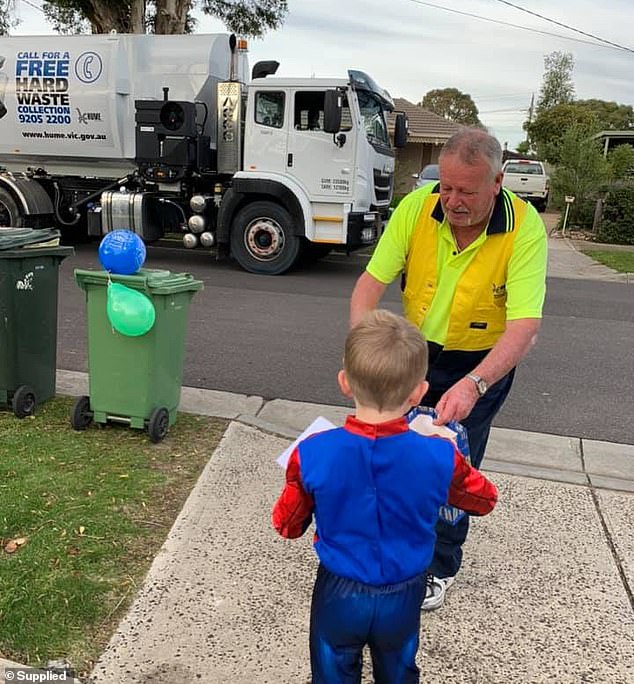 Best birthday ever! Kindhearted garbo gives the perfect gift to a little boy spending his special day in isolation by letting him ride in his truck

A kindhearted garbage collector went above and beyond to brighten up a five-year-old’s birthday after he’d been stuck in isolation for weeks.

So for the youngster’s fifth birthday on Wednesday Ron had a very special surprise arranged.

Arriving at Cooper’s house, in Sunbury, Melbourne, Ron jumped out of his truck and handed the schoolboy a gift bag.

Inside the bag were two toy bins containing chocolates and a card with $10 inside.

‘To my little mate, Happy Birthday from Ron the garbo,’ Ron had written inside the card.

Garbage collector Ron Swain has gone above and beyond to surprise five-year-old Cooper Henderson with a birthday present and a ride in his truck. Both pictured 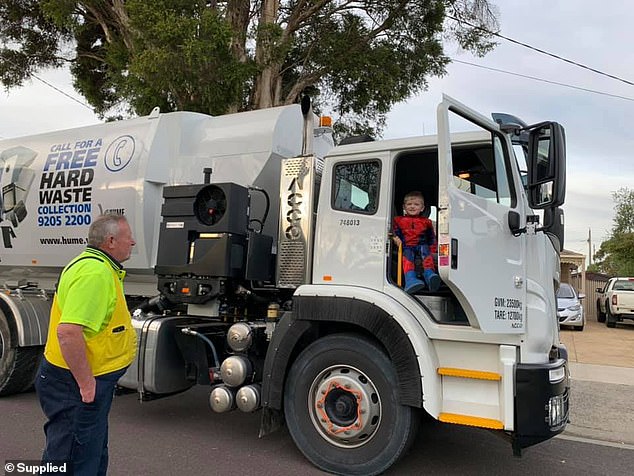 Cooper, a passionate garbage truck enthusiast, was lifted up into the vehicle with a huge smile

Cooper, who was dressed in a Spiderman outfit, was even treated to a ride in Ron’s truck.

His mum Erin Henderson shared pictures of her son’s special day on Facebook in a post that has been viewed over one million times.

‘His fav bin truck driver made his day super special & has made his whole day,’ she said. 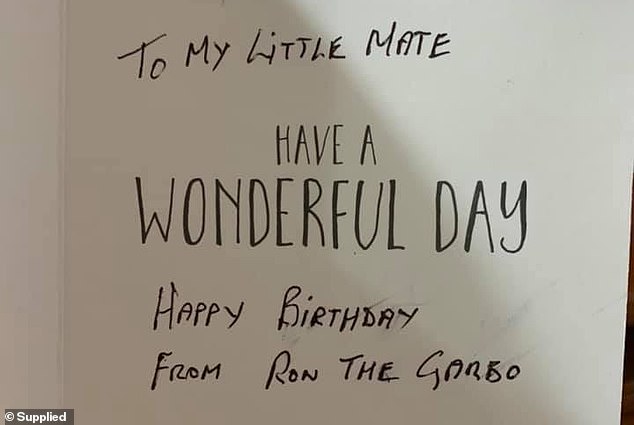 Mrs Henderson told Daily Mail Australia that after she had to cancel Cooper’s birthday party at a trampoline play centre she wrote to the council to ask his favourite garbage truck driver to brighten up her son’s time in isolation.

‘I just said “can you get your driver of number 13 to yell out happy birthday and to give him a big wave and just sort of making his day” and he certainly made his day he went well above that,’ she said.

Mrs Henderson said Cooper had learned which truck Ron drove and had been waving to him everyday but she never expected the council worker to make such an effort.

‘I was blown away, he’s made Cooper’s birthday one to remember,’ she said. 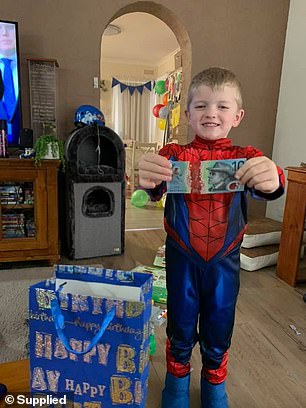 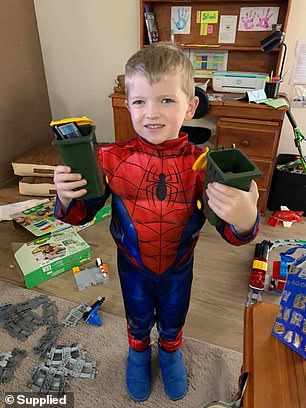 Mrs Henderson said her son hopes to be a garbage truck driver when he grows up and is already doing his part to make sure the neighbourhood is trash-free.

‘Cooper will always go collect the bin and he does a couple of the neighbours bins as well he brings them in,’ she said

‘He definitely wants to drive bin trucks, my husband wants him to start a garbage company when he gets older.’

Ron said after the call for help came through to his office from Mrs Henderson he decided to go the extra mile.

‘I asked my boss if we could organise to two little bins for him and then I gave them to my wife who filled them up with chocolates for him and I put ten bucks in a card for him,’ he said.

Ron said seeing Cooper’s happy face glued against the window was one of his weekly highlights.

‘Every Wednesday he is there at the same window rain, hail or shine, I can always count on him being there and giving me a wave,’ he said.