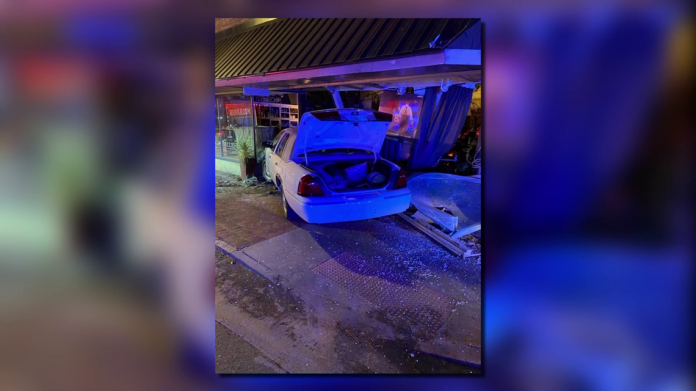 On Friday, Kingsland Police say a drunk driver hit the building at the corner of Lee Street and King Avenue.

For the 10th time in 12 years, a car has damaged her business in downtown Kingsland.

This time, a Kingsland police report says a woman driving under the influence came down State Road 40 approaching 100 miles per hour and ran into Ballast Pointe Trading Company.

The home furnishing store owner has picked up the pieces multiple times before. No one was hurt in the crash and the store wasn’t open, but it leaves the store and building owners picking up the pieces again.

“It’s obviously shocking,” Dana Hawthorne, owner of Ballast Pointe Trading Company said. “When the entire front of your building is gone right before your eyes, and the police and fire trucks are everywhere it stops you in your tracks a little bit.”

Thank you all so much for your kind words and prayers. This is the 1… 0th time this building has been struck in our 12 years of business. Hoping the Mayor/DDA/DOT will find a way to protect this historic structure,downtown business and its patrons.

The historic building has taken a beating from modern-day traffic, mostly from semi-trucks turning from eastbound SR-40 onto southbound U.S. 17.

“They just hop the curb and come too close and take part of the building with them,” Hawthorne said.

After countless repairs, Hawthorne says she’s reached out to the city of Kingsland, the Georgia Department of Transportation and other agencies for help but with no luck.

“Nobody wanted to really take accountability. I think there is a lot of confusion on both parts of who’s in charge of that,” Hawthorne said.

The GDOT tells First Coast News in a statement it is open to reviewing SR-40 and US-17 intersection enhancement requests from the City of Kingsland.

A clerk for the City of Kingsland office tells First Coast News since it is a state highway, it is GDOT’s responsibility.

Hawthorne says that during a restoration project years ago, a truck driver said they turn onto U.S. 17 to avoid a weigh station along Interstate 95.

Ideally, Hawthorne would like for semi-trucks to bypass the area, but GDOT says it cannot restrict any vehicular traffic on State and US highways.

Hawthorne simply wants to protect her business and potential patrons in Downtown.

“The windows shake and the building trembles every time a big truck barrels through the intersection,” Hawthorne said.

“Hopefully we can rebuild better than ever but there’s going to be some changes otherwise this will keep happening,” Hawthorne said.

She is not sure of how much it’ll cost to repair the storefront.

First Coast News is reaching out to the U.S. Department of Transportation for answers.

How to Get Grocery Delivery in NYC Right Now