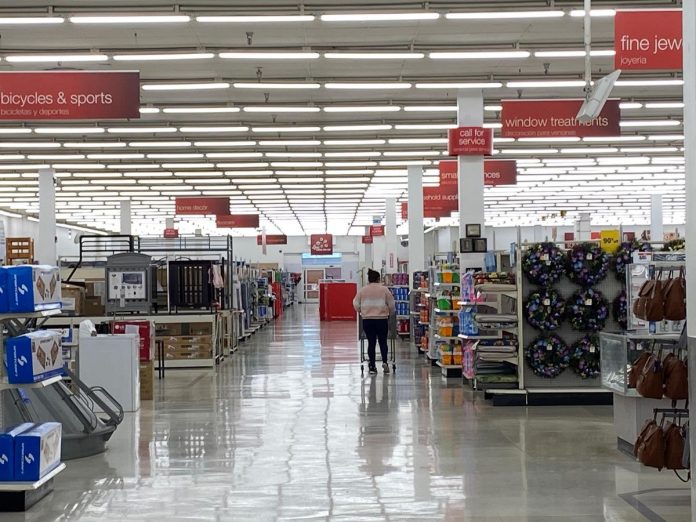 Until very recently, Kmart operated over 2100 stores in all 50 states. Now only 34 stores remain. And the stores that remain are sparsely stocked and in desperate need of attention. It is a sad time for a once-proud retailer.

Even though most retail stores have been closed due to the COVID-19 restrictions, these Kmarts are open for business. With their pharmacy departments and their grocery and home improvement selections, however limited in stock, Kmarts have been deemed “essential businesses” by state mandates.

Kmart was born in 1962, the same year that saw the birth of Walmart, Target, and Woolco. Its owner, the S.S. Kresge Company, needed to jumpstart its stagnated variety store business. Kresge’s plan to build a national discount department store chain seemed like a good remedy. The earliest Kmart stores sold hairpins, fur coats, men’s suits, bowling balls, diamond rings, and 3 for-a-dollar sub sandwiches. Its home department carried everything from lumber to paint to hardware. The stores catered to their suburban customers and sold what they wanted and needed.

Within a decade, there were over 580 Kmarts throughout the country. By 1982, that number swelled to over 2000. By the end of the 1980s, it was the second largest retailer and the tenth largest employer in the country. And then along came Walmart.

In November 1990, Walmart overtook Kmart in overall sales. Walmart’s new stores and lower prices made Kmart stores look shabby and more expensive. It was the beginning of a downward spiral for Kmart. The 2001 bankruptcy, its 2004 purchase of Sears, and CEO Eddie Lampert’s ruthless leadership played a huge role in its downfall. Target, big box stores, and the internet also contributed to its troubles. Kmart became a retail afterthought. With thinning stock, dirty floors, dimly lit parking lots, and slightly higher prices, Kmart was no longer a necessity.

But that has changed at its remaining 34 stores. For the first time in decades, Kmart is serving a purpose for the few who live near these stores. They are open and declared essential.

A recent visit to a Maryland Kmart, during the current stay-at-home order, proved otherwise. Signage that promoted social distancing was not needed. There were very few customers.

An overstocked clothing department sat alongside an odd assortment of grocery products, a barren home and sporting goods department, and aisles and aisles of dramatically discounted holiday items. However, a pharmacy located in the store’s corner clearly served a need for its regular customers.

Unlike other Kmarts visited over the past few years, this Maryland Kmart was relatively clean. There was a certain pride to it. In spite of dwindling truck deliveries, this store was seemingly doing the best with what it had. Twice-weekly truck deliveries have been cut in half. Store employees do not even know what will be on these trucks. Hopefully it will be something that shoppers need so that sales do not drop any further. Kmart associates need jobs and the country does not need another empty retail building.

The checkout process at Kmart can be a grueling experience. Lines are terribly long and its IBM registers date from 2007. Shoppers often abandon these lines and just leave the store. But during that recent visit, an announcement, “Attention Kmart shoppers,” recalled the store’s glory days. A supply for N95 respirator masks had just arrived. $4 each; limit four per customer at the pharmacy counter. Once again, Kmart was essential.

Truck crashes into Little Rock and Gem Shop after accident in...