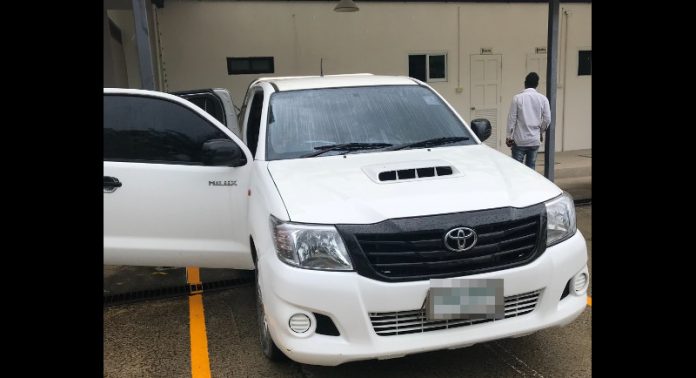 PHUKET: A Korean man was found dead by asphyxiation in his pickup truck parked in a car park off Kwang Rd in Wichit yesterday (July 31).

Police also found a letter written in Korean in the cab of the pickup, which was translated by the Korean Consulate in Phuket. Photo: Wichit Police

Lt Col Narong Muangduang of the Wichit Police was called to the scene, the car park of a company named by police as Golden Triangle Bean Co Ltd, at around 11:40am.

Police together with Kusoldharm rescue workers arrived at the scene where to find the body of Hoki Jung, 40, in the driver’s seat of a white Phuket-registered Toyota pickup truck.

His head and neck were covered by a plastic bag which was sealed with tape around his neck and linked by a pipe to a cylinder of nitrogen in the bed of the pickup.

Police also found a letter written in Korean in the cab of the pickup, which was translated by the Korean consulate in Phuket, as follows:

“Sorry to my family, those who have taken care of me. Please forgive me for doing this. I have tried my best, but I really cannot. I am guilty of doing a lot of things, but they are not completed. I’m sorry for leaving my girlfriend who always loved and cheered me up. Sorry for being wayward and deciding to do this. Thank you so much for loving me. It is a short and unfortunate life. I want to take a rest. Sorry again.”

Lt Col Narong explained that from CCTV footage checking, Mr Hoki arrived at the scene and parked the pickup at the car park at 7:35am. What happened after then police could not tell as the CCTV camera for the car park was a long way from the vehicle, he said.

A couple days ago, Mr Hoki ordered his employees to buy a cylinder of nitrogen in order to make nitro coffee at his own café, but the employees could not find a cylinder for him, the friend said.

Lt Col Narong did not reveal any other details about Mr Hoki, but said that police are continuing their investigation and that Mr Hoki’s body was taken to Vachira Phuket Hospital for further examination.