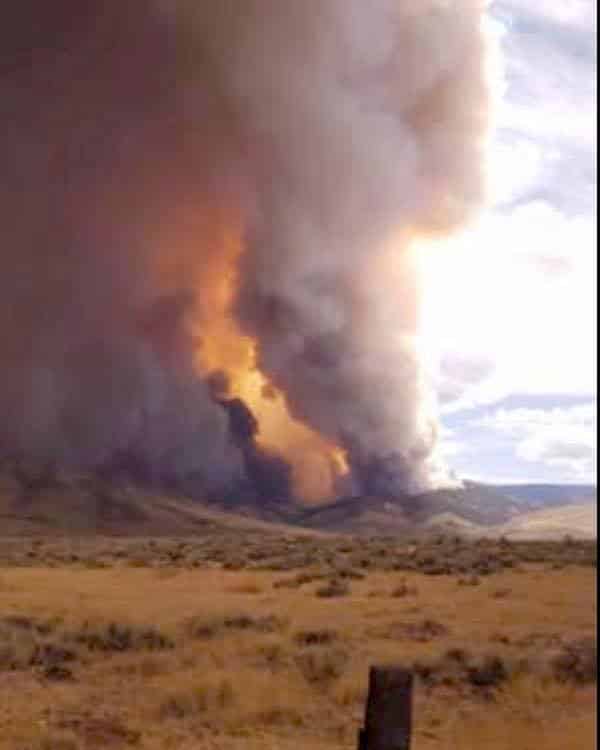 A South Lake Tahoe Fire Rescue brush truck joined in the fight this weekend against the 36,000-acre Loyalton Fire.

The Loyalton Fire is northwest of Reno and about 40 miles from the Lake Tahoe Basin. Smoke may make its way into the basin from the hard-charging blaze that is 5% contained.

“The fire was active overnight, especially on the south and west sides,” officials said. “Good progress was made on the finger running to the south parallel to Highway 395.”

The fire started Friday afternoon around 4:30 p.m. east of Loyalton and southwest of Mount Ina Coolbrith and had a rapid spread rate Saturday with high temperatures, high winds and thunderstorms rumbling through the area. The blaze is burning timber, sagebrush and tall grass.

Unsettling weather triggered an unusual warning by the National Weather Service of a fire-induced tornado.

A massive fire cloud known as a pyrocumulonimbus formed over the fire. When high winds collided with the fire and whipped it into the air, a spectacular tornado-shaped spiral of flames was formed.

Officials said with support of multiple helicopters and air tankers personnel worked to slow the progression and protect structures.

The fire had burned over 36,000 acres as of Sunday morning and the cause is under investigation.

There are 12 hand crews, 42 engines, six aircraft, eight water tenders, 18 bulldozers and masticators and 580 total men and women are fighting the blaze.

Mandatory Evacuation Orders have been issued for Balls Canyon, Long Valley Rd., Border Town, Copper Field and Cold Springs and an advisory has been issued for highways 70 and 49 south to Loyalton.

Due to the fire, officials from the Humboldt-Toiyabe National Forest have closed all land in the area to the public. All areas, campgrounds, trails, and roads on the Carson Ranger District west of the Peavine ridgeline from the intersection of Peavine Road and North Virginia Street downtown to Verdi, California are closed to public access.

People face a maximum fine of $5,000 or six months in jail or both for violating the order.

“With the extreme fire weather and dry vegetation, the fire behavior has been very erratic,” said Forest Supervisor Bill Dunkelberger in a press release. “We are asking the public to comply with this closure and stay out of the area, so we can focus on suppressing the fire.”

The area remains under an extreme heat warning. Dense haze and smoke is expected through Monday evening.

The National Weather Service is also calling for thunderstorms Monday and Tuesday in the basin. There is a 40% chance of precipitation Monday and a lesser chance on Tuesday.