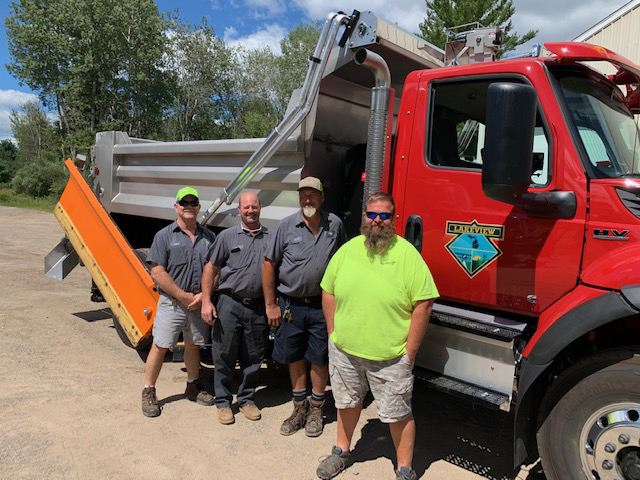 LAKEVIEW — This village expanded its fleet Tuesday with the receipt of a new plow and dump truck.

The 2019 red International brand is “a pretty impressive piece of equipment,” according to Lakeview Village Manager Darin Dood.

The vehicle, which was ordered last year by then-Village Manager Warren Rothe with the approval of the Village Council, arrived earlier this year. But then it had to be outfitted with the extras: multiple plows, a dump box and other add-ons to make it usable year-round.

“It’s quite a process to get a dump trunk,” said Dood. “You can’t just go buy one off the lot.”

And it’s expensive. The truck’s price tag came in around $198,000 “and some change,” Dood said. But its purchase also was part of the village’s property replacement schedule.

“We had to stick $4,000 to $5,000 into the oldest truck to rehab it to keep it on the road,” Dood said. “We’re debating keeping it for projects, or we may sell it. There are times when we pile snow and haul it, and this gives us the ability to have all four people working. In the past, we have had to hire drivers to help us remove it.”

Lakeview DPW Foreman Brian Bucholtz agreed. Having three plows in the village’s arsenal will help him and the other employees work more efficiently during the winter months. In addition, the new truck has many additional features the others don’t.

The new vehicle has a heavier front and rear than the older models do, which makes it more durable, and its aluminum alloy rims won’t rust. The material handler on the back “allows us to gravel shoulders or spread sand on icy roads,” Bucholtz said.

A 12-foot mouse-ear front plow is designed to throw snow up higher on the curb, even on top of existing piles, rather than pushing it down so that it is left in driveways. The truck also has an underbelly plow with 7-foot wings that fold down for easier clearing of snow, but also the belly plow and wings will enable employees to clear roads in one pass down and back because they can plow 18 feet of snow each time.

“We hope in the downtown area we can try to avoid piling snow in the middle of the street,” Dood said.

Another feature is an adjustable laser on the truck’s roof that aims in front and alerts the driver as to where the wing plow’s trailing edge is. That way he can avoid hitting mailboxes and other obstacles, like raised manhole covers, when plowing.

Other details include a sun visor and blacked-out hood for less glare and reflection, which is especially important in the winter “when everything is white, snowy and bright,” said Bucholtz; as well as heated mirrors, heated seats and a heated windshield.

“From my perspective, the heated windshield is a big plus,” he said. “Even with the defrosters running in the vehicle when we’re plowing, the snow and ice have a tendency to build up, so this will be extremely beneficial to the driver.”

Employees will have to learn how to maneuver the joystick that operates all the plows and the dump box. They just have to push the button and pull the trigger, Bucholtz said, but it’s going to take some getting used to.

“We’ll probably go out to the gravel roads and get a feel for it so we can be comfortable with it, and we have to set up the laser,” he said. “We’re going to start using it in next three weeks.”