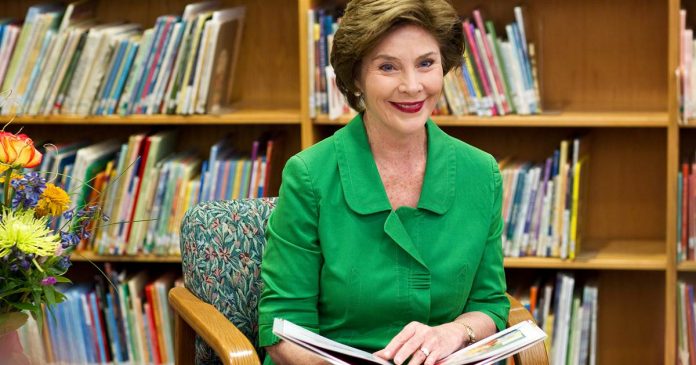 Nothing screams summer like a summer reading challenge. Relaxing at home can always be spent curling up with a good book, and luckily a fresh set of suggestions isn’t hard to find.

Former first lady Laura Bush released her picks for her summer 2020 reading list earlier this week, with books for young readers of all ages. The list includes 20 books and novels for beginners, elementary students and middle school readers that are looking to kick their summer reading into gear.

“Now, more than ever, it is important to keep children engaged in reading,” Mrs. Bush said.

The books span a variety of topics, ranging from coming-of-age to race to friendship. A pick for younger readers even includes a children’s book written by Bush’s very own daughters, Jenna Bush Hager and Barbara Pierce Bush.

From heartwarming stories such as “Hair Love” and “Stella Diaz Never Gives Up” to lighter reads such as “Wrecking Ball” and “Escape from Mr. Lemoncello’s Library,” there’s a book for every kind of reader out there.

Read on for Mrs. Bush’s full summer reading list for 2020.

This board book makes it easy for little ones to learn the alphabet through interactive pages. They’ll learn about alphabet concepts while getting to feel, touch and see the letters come to life.

The power of friendship is no match for getting stuck in the mud, as Blue finds when his truck gets stuck on the road. Through animal sounds and other fun onomatopoeia’s, this story can teach any child about the importance of helping others.

Bush’s own daughters, Jenna and Barbara, tell the story of the impenetrable bond that exists between sisters. Inspired by their own childhood, this book shows how one wish makes for little and big sisters alike to become inseparable.

Little Mae has always dreamed of becoming an astronaut, and with her mother’s encouragement, worked to make her dreams come true. Inspired by the story of Mae Jemison, the first African American woman to travel to space, this story reminds little ones to aim for the stars.

5. “Juno Valentine and the Magical Shoes,” by Eva Chen

Though her favorite shoes seem to be nothing special, Juno Valentine still loves to wear them everyday — until they disappear and she finds herself in a room full of magical shoes. Each pair allows her to step into the shoes of women icons, from Frida Kahlo to Serena Williams, but she eventually learns that the best shoes to be in are her own.

This heartwarming story serves as an ode to falling in love with natural hair. Former NFL wide receiver Matthew A. Cherry highlights the bond between a Black father and daughter, Zuri, as the father styles her hair for a special occasion.

7. “All Are Welcome,” by Alexandra Penfold

Get a daily roundup of items that will make your life easier, healthier and more stylish.

A New York Times bestseller, this read celebrates diversity in all of its forms by reminding little readers that everyone has a place and space to belong.

1. “The Proudest Blue: A Story of Hijab and Family,” by Ibtihaj Muhammad with S.K. Ali

Ibtihaj Muhammad, Olympic medalist and social justice activist, tells the story of sisters Faizah and Asiya, who are starting their first day of school. However, it is also the first day of hijab for Asiya. However, not everyone finds Asiya’s blue hijab to be as beautiful, and despite hurtful words, Faizah also learns to be strong.

This book depicts the true story of the Mendez family, who fought to end segregation in California schools — seven years before the Brown v. Board of Education Supreme Court ruling. Sylvia Mendez, excited to attend school, is turned away from her neighborhood school and told to attend the Mexican school instead. Thus, the Mendez family takes matters into their own hands and files a lawsuit in order to help end segregated schools.

3. “A Place to Land: Martin Luther King Jr. and the Speech That Inspired a Nation,” by Barry Wittenstein

This story reflects on the process behind Martin Luther King, Jr.’s “I Have a Dream” speech, and how exactly he came to deliver it during the 1963 March on Washington and “found a place to land.”

Robot Roz awakens on a forested island alone. In a desperate need to survive, she befriends the unwelcoming animal inhabitants of the island and adapts to the world around her. All is well, until she is forced to reckon with her past in this tale of two worlds.

Greg Heffley and his family begin to renovate their home, but quickly run into a world of problems. Between mold and rotting wood, the Heffley’s begin to wonder if all the change was even worth it at all — and if they must stay or leave town.

Famous game maker Luigi Lemoncello recently designed the new town library, but for protagonist Kyle, the challenge isn’t getting there — it’s getting out. This action-packed story will have young readers eager to turn every page.

7. “The Year of Billy Miller,” by Kevin Henkes

Kevin Henkes tells the story of Billy Miller, a boy who is just about to start second grade, and how he navigates life with family, friends and the role of being an older sibling.

On a family trip to Mexico, Stella Diaz discovers that all of the marine animals and life forms she loves are in danger due to pollution. With the help of some friends, Stella doesn’t give up and saves the day. In her storytelling, Dominguez brings the characters to life through the incorporation of Spanish language and simple art.

This tale centers around a young girl named Shannon, who is part of the sixth grade “in-crowd.” However, Shannon realizes the rules of being “popular” are hard to keep up with, and she must decide for herself whether she wants to listen or make her own set.

This Coretta Scott King Award winner tells the story of ten-year-old Bud, who embarks on a journey to find his father. Bud may be on the run, facing everything from fear to hunger, but he never gives up.

Jordan Banks had always wanted to attend art school, but his parents had a different plan. After being enrolled in a prestigious private school, Banks must navigate life as one of the few kids of color in his grade. This coming-of-age novel portrays the difficulties of fitting in or standing out.

One young girl is forced to flee from her home in Saigon during the Vietnam War, heading to America in the pursuit of hope. Inspired by the author’s own experiences, this novel helps depict immigration from a child’s point-of-view.

This book of poems tells, from the author’s point of view, what it was like to grow up as an African American in the ’60s and ’70s. The emotionally-charged poems are eye-opening and insightful, and a worthwhile read for any growing reader.

To discover more deals, shopping tips and budget-friendly product recommendations, download the new TODAY app and subscribe to our Stuff We Love newsletter!

Jillian Ortiz is a digital editorial intern for TODAY E-Commerce.