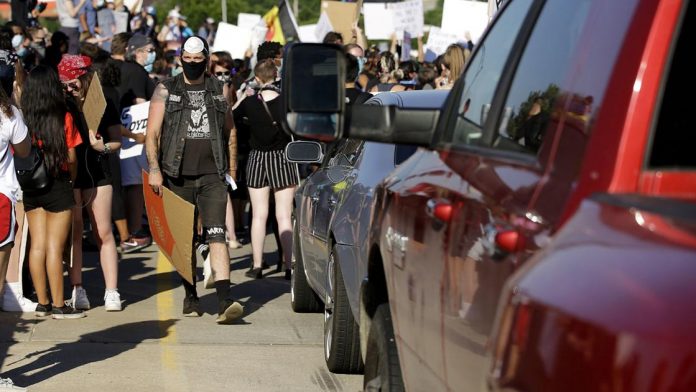 Area law enforcement continues to be tight lipped about an investigation into a Sunday encounter on Interstate 244 between a motorist pulling a horse trailer with a pickup truck and protesters, which left some demonstrators injured.

The Oklahoma Highway Patrol confirmed Monday that it is investigating the incident which occurred early Sunday evening on I-244 near North Detroit Avenue, but has said little else since.

Reached Friday, an OHP spokesperson said the agency would not be commenting any further on the matter at this time.

Others contacted by the World offered little additional comment.

Tulsa District Attorney Steve Kunzweiler said his office hasn’t received any reports as yet from OHP. Kunzweiler said the OHP has received numerous videos, photos and reports from witnesses, so it is taking a while for them to sort through them.

The Tulsa County Sheriff’s Office is not involved in the investigation, a spokesperson said. Representatives with the Tulsa Police Department did not return requests for comment.

The U.S. Attorney was more tight lipped, with a spokeswoman offering the agency’s standard declination to confirm or deny the existence of any pending investigation related to the incident.

Video taken by media and others at the Black Lives Matter rally depicts several dozens of mostly young adults surrounding a red pickup truck and horse trailer as it crept east forward on the interstate. The vehicle previously had been stopped along with other motorists for a period of time on the interstate by protesters, who had clogged the highway when the rally spilled out of the nearby Greenwood area.

One video shows one car at the head of the stopped vehicles, driven by a black woman, being permitted by protesters to continue on down the highway.

The protesters quickly closed ranks though when another motorist, described as a white male, who was driving the red pickup and pulling the horse trailer, began trying to follow the vehicle that had just been let through.

One video of the incident depicts a male protester to the side of the truck yelling at other protesters in front of the truck to let it pass. The truck appears to drive forward slowly at first, causing some in the crowd to push against the truck from the front and sides in an apparent attempt to prevent it from leaving.

The truck stopped for a moment before driving on after clearing the crowd until it approached Oklahoma Highway Patrol troopers near their vehicles parked on the highway a couple hundred yards to the east.

At some point prior to the motorist driving away from the crowd, the driver could be seen placing a handgun on the truck dashboard, a still image taken by a Tulsa World photographer shows.

Other video posted online shows the truck pushing against two people’s backs as they hurriedly stepped forward, trying to avoid being run over. One of them, a man, appeared to be carrying a bicycle, and the other, a woman, had protest signs.

The truck came to a slow-roll stop as the front end bounced up and down, with protesters beating their fists on the vehicle’s windows. A crowd then surrounded the woman protester, who appeared to be injured, as the truck drove off.

The OHP said two demonstrators suffered minor injuries when the truck drove through the crowd.

No names have been released.