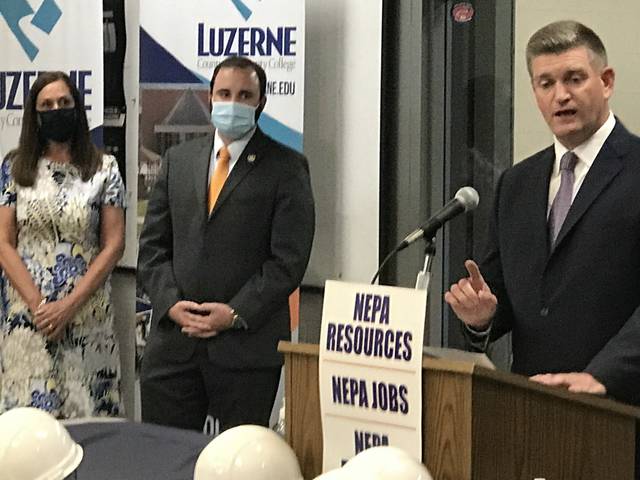 NANTICOKE — Rep. Aaron Kaufer Thursday said it took a “bulldog” to see the project through.

Using a backdrop of an LCCC state-of-the-art manufacturing classroom and a sign that read “NEPA Resources, NEPA Jobs, NEPA Families,” Yudichak, Kaufer and other key supporters of the newly minted legislation were celebrating House Bill 732.

After lengthy and challenging negotiations with the Wolf Administration and several business and labor organizations, the effort culminated in the establishment of the the Local Resource Manufacturing Tax Credit.

The tax credit, Yudichak and other lawmakers said, will attract private investment in the construction and operation of Pennsylvania manufacturing facilities that use dry natural gas to produce fertilizer and other petrochemical products.

As lawmakers and officials spoke inside, however, demonstrators outside raised concerns about how development fostered by the bill giving tax credits to petrochemical producers will affect the environment.

The message inside was clear, however — House Bill 732 will lead to creation of hundreds, if not thousands of long-term, family-sustaining jobs in an environmentally friendly manufacturing industry

Yudichak had offered an amendment that provided a tax credit against 20 percent of a qualified company’s annual tax liabilities. Yudichak said qualifying for the Local Resource Manufacturing Tax Credit requires a company to invest $400 million in the construction of a new manufacturing facility, would create 800 new and permanent jobs, pay prevailing wages and benefits, and use carbon capture and sequestration technology when economically feasible.

And, Yudichak said. the Local Resource Manufacturing Tax Credit has no immediate fiscal impact to the state budget, and no tax credit is payable until at least 2025 when companies would become eligible to apply.

Kaufer added, “The legislation is about bringing good-paying jobs and cutting-edge technologies to northeastern Pennsylvania. It is about ensuring that we will be a manufacturing hub for the foreseeable future.”

Yudichak said “bulldog” might be too kind of a description for his effort to get the tax credit through and signed by the governor.

Yudichak explained that in 2019, he and the governor were at odds over the closure of SCI-Retreat and the White Haven Center — resulting in a loss of 800 jobs, 400 at each facility.

Yudichak said he met with Wolf in August of last year to “turn the page” following the closures.

“I told the governor that we need to invest in Northeastern Pennsylvania’s economic future,” Yudichak said.

Wolf had originally vetoed a different version of a similar bill to the tax credit version and negotiations began. He credited Wolf with being open to giving the idea a second look.

“We negotiated a better bill,” Yudichak said. “And today we are creating generational economic opportunities for Northeastern Pennsylvania.”

The Pennsylvania Manufacturers’ Association’s economic analysis of HB-732 estimates that more than 4,400 jobs and over $1.6 billion in economic benefits would be generated from the construction of four manufacturing facilities under the provisions of the legislation.

The Senate passed the legislation by a vote of 40-9. The House concurred with the changes made in HB-732 by a vote of 163-38. Gov. Wolf signed the bill on Thursday morning.

“Together, we have set a historic precedent in terms of both bipartisan achievement and policy,” Martire said. “The legislation creates critical economic opportunities for many areas of the state while offering strong worker protections.”

“House Bill 732 will bring good jobs to our area both during the construction of these plants as well as the manufacturing of the products they will produce,” Faust said.

David N. Taylor, President and CEO, Pennsylvania Manufacturers’ Association, said the enactment of the Local Resource Manufacturing Tax Credit will establish an entirely new manufacturing sector in Pennsylvania, adding a billion dollars in up-front capital investment, hundreds of millions of dollars in wages to construct and staff the new plants, and thousands of direct, indirect, and induced jobs across the areas of Pennsylvania that need them the most.”

Sen. Lisa Baker, R-Lehman Township, said HB-732 0ffers the incentive and the means for others to access many advantages.

“Contrary to the criticisms of those who dislike tax breaks, this is not a bailout, it is not a sweetheart deal, and it is not money misdirected,” Baker said. “It is an effort to encourage greater use of a Pennsylvania resource to expand manufacturing capabilities, to bolster employment. and to fuel new processes and products.”

John Augustine, President/CEO at Penn’s Northeast, a multi-county development agency, commended the cooperative effort of the state legislature, the governor and other partners.

“Because the bill was signed, we were able to tour a very large natural gas company today that would be able to utilize these tax credits,” Augustine said. “The investment, if we can land them, would be in the billions. The jobs would be in the hundreds-plus, paying above family-sustaining wages.”

Augustine said if the first project can happen, he expects more would follow.

“Our other state competitors are utilizing these types of bills to attract these types of companies,” Augustine said. “And now, finally, this bill puts us not only on a level playing field, but it gives us a competitive edge in NEPA in an environmentally responsible and affordable way.”

Scott Cannon, environmental advisor for Action Together, was among those raising numerous concerns. First among them, he said, is health.

“A Pennsylvania health study of fracking sites was proposed in 2014. That study never happened,” he said. “Today, there is a current study on fracking health effects from Governor Wolf that won’t be completed for three more years.”

“Since 2008, thousands of gas wells have been built near communities without any health studies to consider,” he added, noting that the state Department of Environmental Protection “lists 350 water contaminations,” and criticizing the agency’s record on regulating polluters in the industry.

As well, Cannon fears that the bill “will incentivize the practice of fracking for the next 25 years,” despite early promises of natural gas serving as a “bridge fuel” to renewable energy. Instead, he maintains, it is being promoted over renewable energy as the main source for future energy.

“This is corporate welfare at taxpayer expense,” Cannon added.

He also said that the creation of more plastic products will only add to land and water pollution, while the gas industry as a whole is contributing to harmful greenhouse gas emissions.

“You may hear people say that using natural gas is better than coal and its use protects the environment,” Cannon said. “What they really mean is to “mitigate the damage done to it.’”

“Brush truck” cleans up debris from Hurricane Hanna in Lyford

Bear breaks into a parked pickup truck and makes off with...