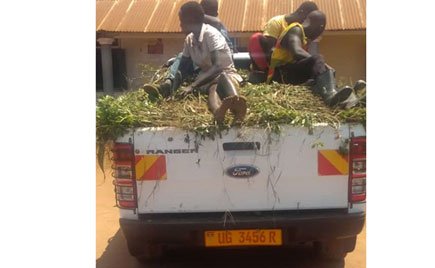 The LC5 chairman of Kwania District, Mr Basil Okello Onach, is in trouble over alleged misuse of a government vehicle.
Trouble started on Monday when a Toyota Double cabin pick-up truck registration number UG 3456 R was intercepted at Aduku Town Council, being used for transporting fresh groundnuts from the garden of the district chairman.
The groundnuts were being transported to Mr Okello’s home, according to police.
The vehicle was impounded following a tip off from concerned members of the community.

Mr David Komakech, the district Internal Security Officer, said he commanded a team of security personnel who impounded the vehicle.
He said the driver, Mr Emmanuel Odongo, a resident of Aduku Town Council in Kwania District was handed over to police.
“The vehicle was taken to Kwania Central Police Station where it is being parked,” he said.
At the police station, a file of abuse of office by using a government vehicle to do an activity which it was not meant for has been opened and the driver recorded his statement.

“Thereafter, he (the driver) was given a bond to report on July 17, as investigations are ongoing,” Mr Odongo said.
“Police is also going to summon the LC5 chairman to make his statement on the allegations that he allowed his driver to use an official vehicle for his personal activities.”
When contacted, Mr Okello Onach said: “The truth is that I had planted the groundnuts in a garden just next to my office and when my children were picking it from the garden, the driver was around, so I asked him to deliver them home. What you saw in the car was the whole groundnut that was harvested.”

Ulmer: The daily life of a semi-truck driver | Columnists