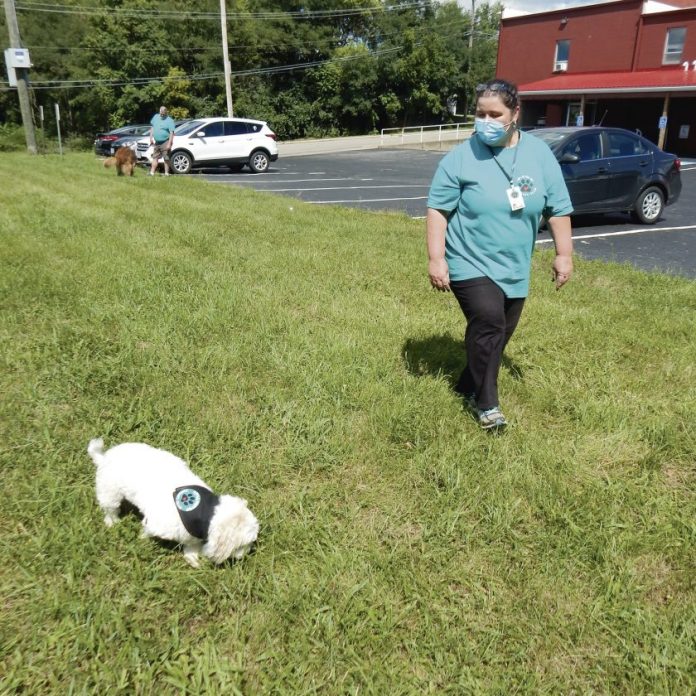 Lisa Inhouse of Austintown with her dog Rennie train on obediences skills at PAWS training held in Weatherfield.

WEATHERSFIELD — Learning to get used to sirens and other loud noises, using steps and escalators, and being in crowd situations are among some of the testing areas dogs and their handlers undergo to become members of PAWS Therapy Team.

A two-day testing event took place recently at several locations in the Mahoning Valley for the 14 dogs and their handlers to see if they had what it takes to be part of the team.

Lisa Inhouse of Austintown with PAWS Therapy Team said before COVID-19 started in March, members of the team would have the dogs visit people regularly in nursing homes, mental health facilities, libraries, community events, courts and other locations. The team also has worked with the American Red Cross and veterans.

“We are waiting to see what we will be able to do. The dogs have done some things this summer that we were able to be part of,” she said.

For the training, dogs spent time at Weathersfield Fire Department to deal with fire responders and firefighters in full gear, sirens, lights and loud engines. Dogs also learned about getting on and off buses at the Western Reserve Transit Authority bus garage. Training was done at local nursing homes for outdoor visits and mock situations involving people in wheelchairs; and at dentist offices and local restaurants with additional lessons on using stairs and escalators.

Inhouse said all 14 dogs were able to successfully complete the training and become team members.

Gina Johnston, a trainer who evaluates all the dogs, said when handlers take their dogs to locations, they are often asked questions about the dog’s history or if it is allowed to be petted or have a treat.

“We want our handlers to share the story about their dogs. We ask them to have the story in their head ready to share when someone asks about the dogs. When we visit a nursing home, many people enjoy seeing the dogs and want to pet them and know about them,” Johnston said.

There is quite a bit of work that goes into escalator training, which is something that dogs are not normally used to. “They learn to get on the escalator with their handler,” Johnston said of the group meeting early at a department store.

Johnston said the dogs have been taking part in drive-thru parades for birthdays and other occasions, including one for Marsha Scott, president of PAWS Therapy Team, who recently got out of the hospital.

In addition to the 14 dogs and handlers, others were there recertifying their dogs.

“Throughout the weekend it was different training to recertify or becoming a member. The 14 dogs were taking part for the first time. We had success as all 14 dogs did well and graduated,” she said.

ALL BREEDS AND SIZES

Johnston said all breeds and sizes of dogs took part.

“Any dog that can behave and learn good manners can train to become part of the therapy team,” she said.

At the Weathersfield Fire Department for training, “we have the fire truck lights running to make sure no dog has seizure issues or other neurological issues going on. We expose them to firefighters in full gear to make sure they do not frighten them,” Johnston said.

Because they could not go inside a nursing home, airport or other locations, a mock situation is created with wheelchairs or loud noises to see how dogs react, Johnston said.

Angela Alexandrides of Poland, who is group vice president, said the team tries to go wherever it is asked to visit, which has included juvenile detention centers, children services agencies and nursing homes.

Plans are to do the training every six months to once per year, she noted.

Carol Barkett of Howland brought her small dog “Charlie” to the event. Charlie is a Malchi hybrid that combines the genes of the Maltese and the Chihuahua.

“I wanted to see how he would react around the large fire trucks and vehicles. He did well and had no problem with the stairs and escalator. Everything we took part in was very interesting,” she said.

“I wanted to see how he would do around other dogs and people. He has no problem with stairs and elevators,” Kemmer said.

Inhouse brought her own dog “Rennie,” a Shishon.

She said what makes the program nice is the variety of dogs that take part.

Inhouse said PAWS Therapy Team was created out of a desire to keep the team local and interacting in the community.

“Our team has a deep sense of community and that is what we want to support,” she said.

Gordon Murray on the design flaws of the McLaren F1