“As a black man in the Lebanon community, too much racism occurs on a day-to-day basis. But it’s normal now. It’s regular. It’s America.”

(Lebanon) —  As mourners gathered in Minneapolis for George Floyd’s memorial Thursday, demonstrators in Lebanon spoke out against racism and police brutality on the streets of their community. The most provocative moment for many came about an hour in to the gathering and lasted just two minutes.

Originally, the protest was going to be a few friends sitting in front of the courthouse with signs and lawn chairs.

Paige Hall, who just turned 20, was one of the organizers. She grew up in the city and said the protest was not directed at the city police department.

“It’s more of like, I know myself, I felt like I always had to walk on eggshells. I was always the one black person in a crowd of white people, which kind of like — not unsettling, but when no one can see the world from your perspective, it kind of pushes you into a corner,” she said. “And I don’t want anyone pushed into a corner in Lebanon.”.

Hall and her friend Abigail Bragunier, a 19-year-old white woman, wanted to do something in the aftermath of George Floyd’s death. They met with the mayor and police chief to agree on a plan.

Originally, Hall said, the police said they would be wearing riot gear. The organizers posted in the Facebook event, “This is in no way to invoke any kind of violence, but to protect the police,” triggering a debate in the comments about the need for and meaning of riot gear. But once the gathering began, with more than 900 people marked as either going or interested online, police appeared to be wearing their normal uniforms. Hall said the organizers had been trying to “talk them down”.

A speaker points to the crowd gathered for a Black Lives Matter protest in Lebanon, Pa., on June 4, 2020.

The event started with prepared speeches from the organizers and Mayor Sherry Capello.

“Every voice should be heard whether it’s shouted or whether it’s whispered. It deserves to be heard and there’s a civil way to go about it,” Capello said. “Leadership sets the tone and I am here today to tell you, as the leader of this city, I do not take your pain lightly.”

On Facebook, the event was described as a silent protest. But it soon became clear people wanted to participate and wanted to be heard.

“Not just blacks, Latinos. We were slaves as well. We stand with you because we are of Afro-Cuban descent and we feel your pain,” said one woman to cheers from the multi-racial, multi-ethnic crowd. “My son since we moved to Pennsylvania has been pulled over four times unnecessarily, just because of the color of his skin.”

“As a black man in the Lebanon community, too much racism occurs on a day-to-day basis,” business owner Joshua Spaulding said. “But it’s normal now. It’s regular. We’re taught to deal with it. It’s not a big deal. This is regular. It’s America.”

Another man called back, “That’s what they told me yesterday!”

The demonstrators passed around a megaphone and took turns standing up on the cement blocks the city had provided as a stage.

“Ya’ll heard it,” the speaker said. “Either you stand with us, or you hide back there.”

A few officers were hanging at the back of the crowd. Three then weaved to the front and linked arms with the protesters. Two walked arm-in-arm with one of the protesters.

Paige Hall’s message – “We see you standing with us, but when it gets tough, are you still gonna stand with us? Are you going to call out your cops? And hold them accountable?”

People echoed, “We gotta know ya’ll are standing behind us.”

The protesters kneeled in front of the officers, asking them to do the same, as police in cities like Cleveland, Phoenix and Los Angeles have done. They chanted, “Take a knee.”

Joshua Spaulding was kneeling in front. He leaned in to say something to Police Chief Todd Breiner.

After a few beats, Breiner turned away. 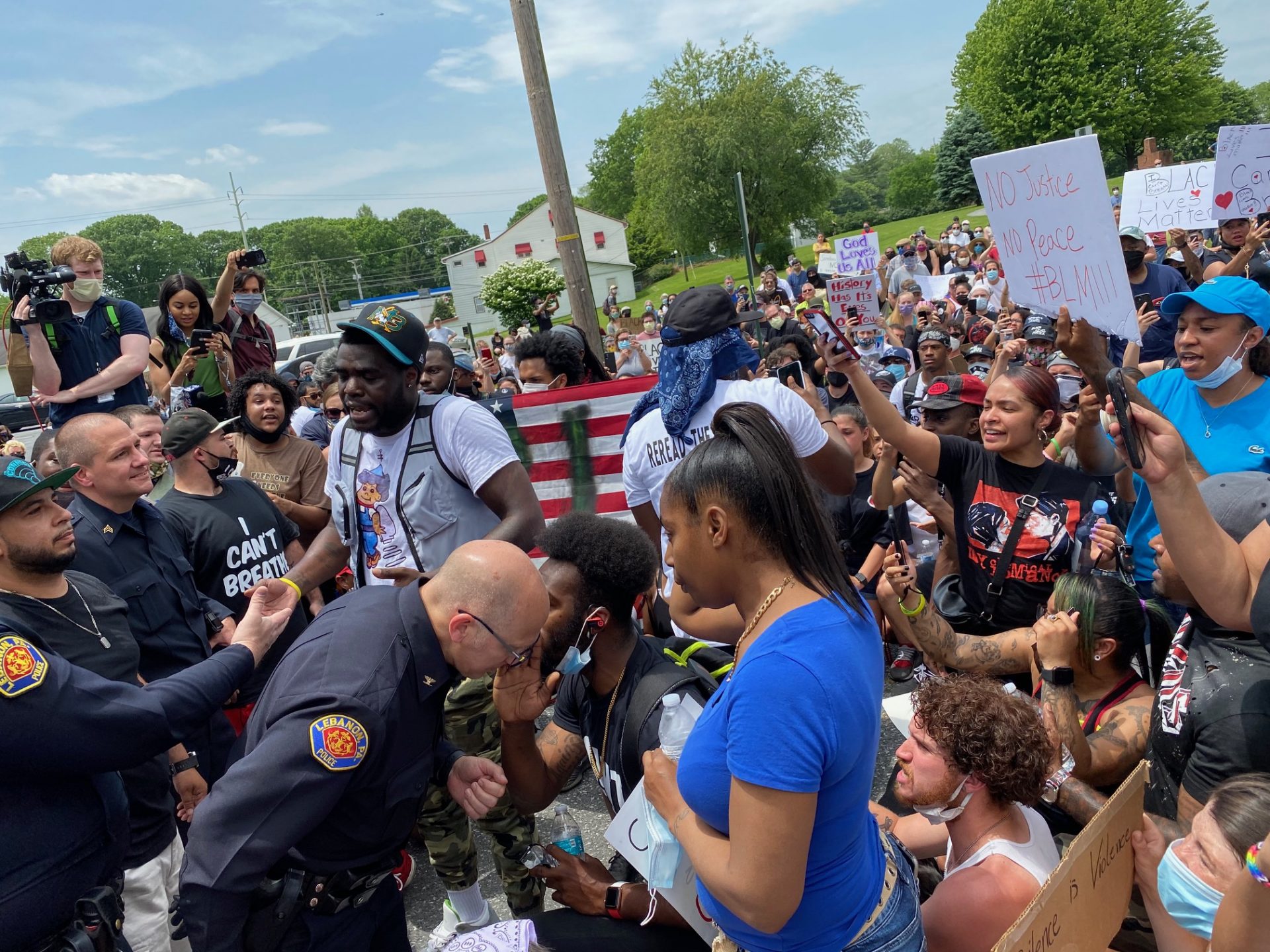 Joshua Spaulding and other protesters ask Lebanon police to kneel with them at a peaceful demonstration in front of the courthouse.

Spaulding stood up amid boos and shouts and took the megaphone. “Let’s keep the narrative correct. Black lives matter,” he said. “We gave the police officers an opportunity to take a knee with us. They chose that they were not able to do that. So, let’s not stay here. Let’s take the protest down the road.

The crowd moved down the street and made a wide loop past businesses, homes, and industrial buildings.

People stood on their porches and leaned out their car windows with signs that said things like, “I need to be distant but I will not be silent” and “silence is violence”.

Protester Raven Morgan was carrying a sign that said, “I just want my mom to stop worrying.”

“My mom’s white. But she has biracial kids,” she said. “She just is worried that one day she’s going to get a phone call saying that we were shot down by police, because they mistake us for someone we’re not. She called me today and she was like, ‘Please be careful, I don’t want anything to get crazy,’ and then all of a sudden, like, I lose one of my kids for protesting something we shouldn’t even have to protest. It’s just hard seeing my mom go through that.”

As Morgan was talking, people started yelling toward the intersection ahead. “Are you serious right now?” they said.

A driver in a white truck was rolling toward a small group of protesters who were trying to hold up traffic.

After a few seconds, the driver turned into a parking lot.

Spaulding — the man who asked the chief to kneel with him — was one of those in the stand-off. He said he joined to support a friend who was planted with a few others in front of the truck as it advanced.

He says he was hoping to see city police do something they had not done before.

“You got the African American community coming out, using their voice, coming to you with their voice, their emotion, their hurt, their pain, and putting it all in front of you. I’m taking a knee. I whispered in the cop’s ear, man-to-man, mano-y-mano, ‘Look, sir. We both stand for what we stand for. If I’m able to take a knee and you take a knee and we take a knee in solidarity, we will change the narrative of this whole entire event.’’”

“They chose not to kneel and I would hope that the crowd would have respected that,” Mayor Capello said. The police were not available to speak, but she stayed outside the courthouse, keeping tabs on where the march was going.

“I don’t want to say the wrong thing, so I just, I think we came here to try and respect both sides and our police did not want to kneel. I support them in that and I wish they would have respected them as well,” she said. “We were hoping to show our unity through linking of arms and the positive message that we provided, so it’s kind of unfortunate that it was asked.”

After circling back to the courthouse, a smaller crowd of demonstrators went to the county jail.

There, they kneeled again, this time on the lawn in front of the jail yard.

PA Post’s Anthony Orozco helped with reporting for this story. Both Anthony and Alanna are part of  the “Report for America” program  — a national service effort that places journalists in newsrooms across the country to report on under-covered topics and communities.”

A Guide To Upgrading Wheels and Tires