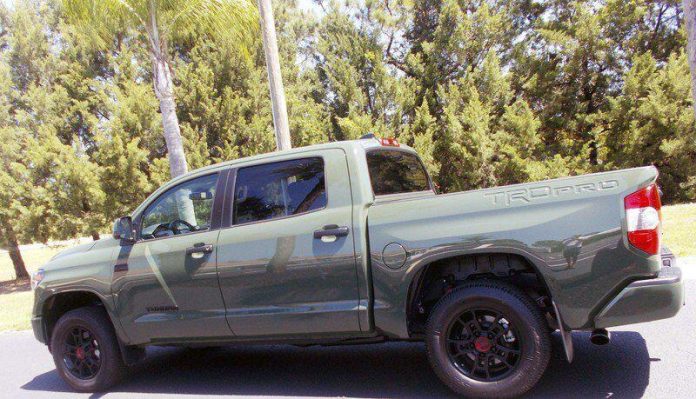 The new Toyota Tundra has added more V8 power across its lineup for 2020 as well as a few other goodies that keep the aging pickup truck in the game.

While domestics dominate this segment, the Tundra has averaged yearly sales of 116,000 the past six years, way less than rivals but holding steady.

Out is last year’s 4.6-liter V8 as well as the flex-fuel version, and for 2020, a more powerful 381 horsepower V8 is fitted into all six trim levels. All are rear-wheel driven with four-wheel drive optional on most.

The SR workhorse is one of the least expensive trucks offering the basics, but for a few dollars more, the SR5 is a better value, including an upgraded infotainment system and available off-road equipment and upgrade options.

Our tester for the week was the TRD Pro, loaded for off-road use with 18-inch aluminum wheels to improve cornering, tuned heavy-duty FOX shocks to keep wheels on the ground and underbody skid plate to protect engine, drivetrain and fuel tank.

The TRD Pro also offers a 38-gallon fuel tank, up from the regular 26-gallon capacity and good for up to 530 road miles.

The big V8 and six-speed automatic transmission are capable enough, but its rivals offer more and deliver much higher fuel ratings in city and highway use. Check out the competition including Ram 1500, Ford F150 and Chevy Silverado 1500.

For loyal Tundra owners though, its towing capability is a hearty 10,000 pounds available with all trim levels, although rivals with optional equipment will handle larger yachts.

The Tundra can be ordered with one of three bed lengths starting with the shortest 5.5 feet, standard on the crew cab. From there the extended cab will handle either a 6.5-foot or 8.1-foot bed — each with 1,730-pound capacity.

For the silver lining, the upgraded CrewMax cab is the largest in the segment, with extended legroom, reclining with fore and aft adjustable rear seats. The Double Cab comes with split-folding rear bench while the basic Tundra has a front-row bench instead of bucket seats.

Toyota was the first to add a suite of safety tech gear across its lineup and the Tundra now has an impressive list including a pre-collision system with pedestrian detection, adaptive cruise control, lane departure alert, automatic high beams, brake assist and smart stop technology.

Interior amenities on the TRD Pro are lengthy as you would expect with its nearly $55,000 price including navigation, touch screen, red-stitched leather seating, JBL 12-speaker sound system.

If off-roading is not high on your must-have list, the Limited or SR5 trims can be loaded with your specific wants and desires for thousands less.

Len Ingrassia is an independent automotive columnist. Contact him at lenscarcorner@comcast.net.

Assembled: Assembly of the Tundra is at Toyota Motor Manufacturing plant in San Antonio, Texas.

Crash test ratings: The National Highway Traffic Safety Administration gave the Tundra four out of five stars for overall safety, frontal crash protection and rollover and five stars for side impact protection. The Insurance Institute for Highway Safety gave the Tundra its highest rating of “Good” in the moderate overlap frontal offset, side impact, roof strength and seat/head restraint in rear impact although it scored lowest “Marginal” and “Poor” in small overlap driver side and passenger side tests respectively. Front crash avoidance and mitigation was ranked “Superior” with the standard system.

Which Pickup Truck Could Dethrone The F-Series