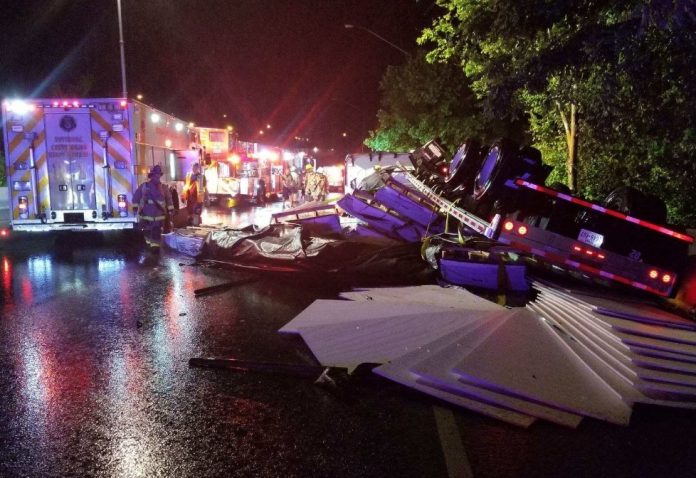 One of the most dangerous locations first responders regularly find themselves is the roadway. There’s just no avoiding it: People crash their cars; providers end up on the roads. This location is becoming more and more dangerous, however.

According to a report from the Emergency Responder Safety Institute, just in the first two weeks of January, seven responders were struck and killed on roadways in the United States.1 In all of 2019, according to the report, there were 44 responder struck-by deaths.

This spike in cases early in the year was concerning for all first responders. Talking about the safety of working in a roadway should not only be prevalent in your station but something everyone is a part of—from the newest members to the most veteran providers, all should understand these risks and how to best mitigate them.

Right now is an interesting time across the country for roadways. With the COVID-19 pandemic resurgent, people are supposed to be at home. Roads are nearly desolate at times when there used to be bumper-to-bumper traffic—they should be nearly accident-free.

This isn’t the case. According to a report by the National Safety Council, there was a 14% increase in fatal car crashes per mile driven in March,2 when nearly the entire country was on strict stay-at-home orders within their states. Nationally, there was an 18.6% decrease in miles driven compared to the same time last year.2

So what’s happening? Why is it that when people are supposed to be home, and statistics back that there are fewer people out on the roads, we see an unexpected increase in fatal car crashes?

The simple answer is that with open roadways, people are driving more recklessly. The Washington Post reported that as traffic decreased, “average speeds increased significantly above the posted speed limit, more than doubling in some cities.”3 From the same article, state troopers in states from Maryland to Minnesota have reported that they’ve seen and ticketed an increasing number of speeders, some caught at speeds topping 130 mph.

Why is this increase in bad wrecks important to a provider? A place that was already dangerous to providers—roadways and highways—is now a place we’ll work more frequently, at a time when the danger of being there is higher.

In my highway response area in Bethesda, Md., which includes approximately 25 miles of high-speed roadway, we end up working on the road more times than not. As a heavy-rescue squad, we’re tasked with extrication of patients from vehicles. Due to this, we’re dispatched on every highway call in our response area. Regardless of the reported severity, we’re sent due to the speed many drivers reach on the highway. Additionally, our ambulances have a straight shot to the highway from the station, facilitating joining the rescue squad on many of these calls.

Since March we’ve had an increase in calls involving tractor-trailers—so much so the state has started to pay attention. Rain almost guarantees running a jackknifed big rig, and it’s usually in the stretch of a single quarter mile of our area.

Nicknamed the Big Curve, a single sky ramp accounts for nearly all our tractor-trailer crashes. But they’re almost never as simple as spinning out or scraping a guardrail. Much of the time these trucks crash into the ramp wall, launching concrete debris onto the highway and drivers below. Or it could be multiple tractor-trailers crashing into each other, obliterating their trailers, trapping drivers, and snarling traffic.

Capt. Aaron Webster, a member of the Bethesda-Chevy Chase Rescue Squad since 1992 and a first responder since 1983, shared thoughts on how things have changed in the last few months and what that meant for him being in command of personnel on the roads. “I’ve never seen anything like the last few months in all of my years with fire-rescue,” he says.

Webster explained where he saw a lot of the problems with crashes in our area stemming from. When looking at major highways across the country, most are straight or have some slight curves in the roadway. Our response area is unique in the sense that not only does it include a major intersection of two large highways, but the roads include many sharp curves with lots of exits and entrances.

Local drivers face these challenges as part of everyday life. But to a driver not used to the area, the splits in highways and constant curves can prove incredibly difficult to navigate. “People are used to straight roads,” Webster notes, and our area doesn’t have this.

Webster breaks down the major components of crew safety while operating on highways like most people break down arriving on scene of an incident.

The first thought is always, Is this scene safe for providers the way it is now? One of the most important aspects of response is not getting pulled into the chaos of the scene without ensuring crews have a safe enough working envelope to be on the roadway. Webster says he utilizes engine companies as blocking units to not only create a buffer around the working zone but also a physical barrier to slow traffic. Sometimes, especially with all the curves in the highways and at night when drivers can have trouble seeing, this requires positioning units much farther back from the incident, slowing traffic down much farther away.

It’s not enough just to have units with their lights on. Webster explains you need to light up the nighttime roadway into the middle of the day. Even past that, he sometimes has his technician raise the light tower and point it back toward oncoming traffic, “not shining into the eyes of drivers but just putting a massive amount of light behind the incident scene to make our presence known.”

Webster related a recent Big Curve incident that required him to shut down the major highway where the incident occurred. In this instance two tractor-trailers had crashed into each other after rain slicked the roadways. These trucks weren’t going to require wreckers to tow them away but small tow trucks to pick up the scraps left of them. While operating Webster noted tractor-trailers and other drivers were still flying past the incident scene at above-highway speeds, heading toward the rest of the curve in the only lane still open. Realizing what was in place to protect those operating wasn’t enough, he ordered the rest of the highway shut down to ensure speeding drivers weren’t approaching the scene. Scene safety is not just a first thought when arriving at an incident but a consistent imperative requiring constant reevaluation.

Jacob Sorensen, NREMT, is a rising junior at the University of Maryland and volunteer firefighter/EMT with the Bethesda-Chevy Chase Rescue Squad in Bethesda, Md.