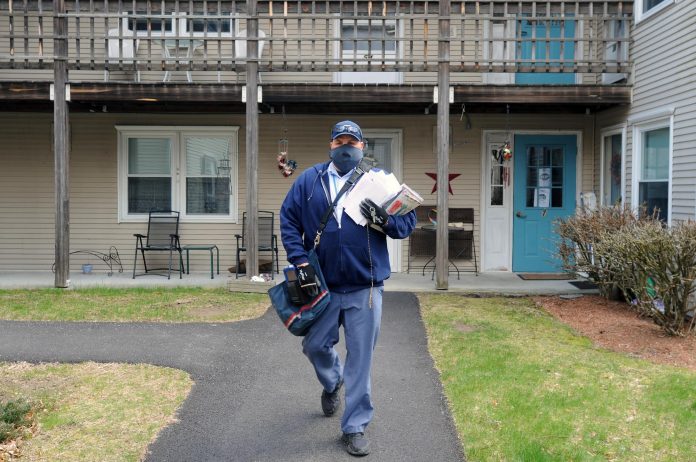 “(The USPS in Holliston) had (protective gear) for us from the get go,” said Holliston letter carrier Dan Wheeler, including hand sanitizer, cleaning wipes and masks. He wears gloves during his daily mail routes, spraying them down with Lysol throughout the day and switching between two pairs.

HOLLISTON – Dan Wheeler delivers mail and packages on foot to about 350 households on a regular work day. In his mail truck, it’s closer to 700.

Wheeler is no longer greeted by homeowners at their mailboxes or front doors – his employer, the United States Postal Service, actually instructs residents not to approach him and other letter carriers until further notice because of the coronavirus pandemic.

“It’s definitely odd,” said Wheeler, a 25-year veteran and vice president of the National Association of Letter Carriers (NALC) Branch 25, about not seeing open signs at businesses along his route, let alone people outside.

Mail deliveries have been skimpier in the last month, he said, largely because most businesses aren’t advertising through the mail anymore. The number of packages he’s delivering, however, has increased.

“It seemed like you were always delivering Kohl’s advertisements,” he said about the thick bundles of paper ads he and other letter carriers used to stuff into mailboxes every day. Now, those ads have virtually vanished.

“I think people are moving toward ordering stuff online for things that they would’ve normally went out for before,” he said. Some members of his family are among them, he said.

For deliveries that require a signature, he now has to knock on the door rather than touching the bell, and will ask for a signature over the phone, along with the resident’s name. He’ll then leave the package in a safe place for the customer to pick up after he leaves.

Wheeler wears gloves during his daily mail routes, spraying them down with Lysol throughout the day and switching between two pairs. He doesn’t normally wear a mask, but does when he makes deliveries in senior living communities.

In between routinely sanitizing his hands and wiping down his mail truck throughout the day before giving it a complete wipe down after his shift, he said the cleaning has become as routine as his mail route.

“It’s like using a seat belt – it becomes second nature after a while,” he said.

Wheeler thinks the Postal Service, a quzai has been protecting him to the best of their ability. He is unaware of any workers in his branch, which includes 36 post offices, who have been furloughed since the pandemic started, or have gotten sick.

He does, however, know of at least 76 postal workers working within the Greater Boston district that have tested positive for the virus.

“(The USPS in Holliston) had (protective gear) for us from the get go,” he said, including hand sanitizer, disinfectant wipes and masks. The problem has less to do with how the USPS is protecting its employees, but rather, how the agency is not being supported by its federal government, he explained.

We are allowing free access to all coronavirus-related stories that benefit public health and will continue to do so throughout this crisis. We are doing so as a public service. We encourage you to support our locally-focused journalism by subscribing to MetroWestDailyNews.com or to MilfordDailyNews.com

Last week, the White House blocked a $13 billion direct grant to the Postal Service as part of the $2.2 trillion coronavirus relief bill and instead offered a $10 billion loan. However, USPS has appealed to Congress for $89 billion in federal grants and says that without financial assistance, the pandemic will leave them bankrupt by September.

“We are at a critical juncture in the life of the Postal Service. At a time when America needs the Postal Service more than ever, the reason we are so needed is having a devastating effect on our business,” said Postmaster General Megan Brennan in a statement this week. “The Postal Service relies on the sale of postal products and services to fund our operations, and these sales are plummeting as a result of the pandemic. The sudden drop in mail volumes, our most profitable revenue stream, is steep and may never fully recover.”

Brennan said the service expects to increase its net operating loss by over $22 billion over the next 18 months – fast-tracked by the pandemic – and over $54 billion dollars in the long-term, threatening their ability to operate.

“As Congress and the Administration take steps to support businesses and industries around the country, it is imperative that they also take action to shore up the finances of the Postal Service, and enable us to continue to fulfill our indispensable role during the pandemic, and to play an effective role in the nation’s economic recovery,” she said.

“It’s no secret this administration isn’t a big fan of the Postal Service,” said Wheeler, adding that most of the service’s financial stress stems from its required pre-funding of health care benefits for retirees.

“For years under the (George W.) Bush administration, they passed a law saying that (the USPS) has to pre-fund health benefits for people for 75 years,” he said. This pre-funding, however, applies to no other federal agency or private corporation, he said, and billions have had to be socked away to sustain the fund.

“The Postal Service has always struggled because of that money,” he said, urging reform.

Early February, the House passed a measure – called the USPS Fairness Act – to repeal this mandate. The act will remove the pre-funding requirement – which was enacted as part of the 2006 Postal Accountability and Enhancement Act – to reduce deeper financial loses.

“It’s tough because we’re stuck with that funding,” said Wheeler. “There’s always going to be a lot of issues stemming from that pre-funding.”

He doesn’t know what the future holds for the Postal Service without the federal funds to surv.ive, but doesn’t’ see the service pausing operations any time soon.

“I think the Postal Service is such an important part of day-to-day operations, especially in this country,” he said. “And some don’t realize how those serviced in rural areas depend on the post office for so much stuff. I deliver so much medicine through the mail.”

Despite not being able to greet those he usually sees along his route, he said many customers appreciate of his work, and some have given him hand sanitizer, another tossed him a bag full of medical masks.

“(The USPS) considers us essential employees and do I agree with that,” said Wheeler, who lives in Douglas. “You just do your best job and be safe.”

There are about 630,000 postal employees across the nation who continue to deliver during the COVID-19 pandemic, said Brennan, covering nearly 42,000 zip codes and handling 48% of the world’s mail volume, according to the USPS website.

Lauren Young writes about politics, social issues and covers the town of Franklin. Reach her at 774-804-1499 or lyoung@wickedlocal.com. Follow her on Twitter @laurenatmilford.

Josh Brolin enjoys a cruise in his pickup truck with wife...