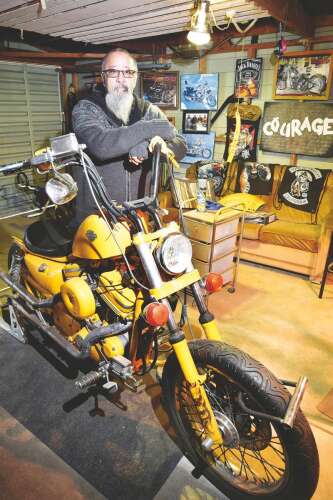 His assailant got 13 years in prison. Baseball bat assault victim Sam Wanoa got a life sentence.

A Gisborne man left permanently brain-damaged when he was hit in the head with a baseball bat still walks around “like a zombie”.

And in several weeks he and his partner and now caregiver could be homeless.

The man responsible for the attack on Sam Wanoa six years ago was up for parole but will remain in prison serving a 13-year sentence (see story, page 5).

For Sam and partner Liddy Hayllar, however, the effects of that horrific night will continue for life.

“I have been sick for years. I panic. It’s been six years since he got sent away,” Sam told The Gisborne Herald.

“I’m getting better but I no longer remember who people are. I walk in town and can’t remember anything. I’m going around town like a zombie.”

Liddy said things got worse during the recent parole hearing.

“When we found out the parole hearing was coming up I almost had a panic attack wondering how I was going to explain it to Sam.

“He didn’t handle it well at all. We had to get a psychiatrist, who he still sees, to help him with that because he was convinced Dwayne (Dwayne Nathan, the man who attacked Sam) was going to come back and finish the job . . . finish him off.

“He cries in his sleep. He has nightmares, the whole nine yards — agitation, abuse — it is absolute hell. He has a lot of paranoia.”

The pair’s relationship has gone from partners to a carer/patient relationship, as Sam, a former truck driver, cannot work.

“Like most couples, we had plans and goals, but now we can’t do anything,” said Liddy. “Our house is being sold so we have to move and we can’t find a rental. I can’t buy a house because no one will give us a mortgage and I don’t earn enough money.

“Come November 20 we are going to be homeless.

“I’ve been applying everywhere for the past two months so that’s a huge stress, and there’s a lot of places we can’t go because of Sam’s head injury.

“Six out of ten times I’ll get it right but it’s continual,” said Sam. “Every day there is miscommunication, frustration, anger outbursts, and this is our life now.”

“I thought this was going to get better,” said Liddy, “bearing in mind Sam had to learn how to eat, drink, talk and walk again. But to me it’s just as hard as at the beginning, six years ago.

“On one level it’s more frustrating and he gets just as frustrated because he wants to do things.”

Sam’s pride and joy, a rare yellow Harley Davidson motorcycle, is in the shed, no longer used because of the injuries he sustained.

A highlight for him is classes with Strive Rehabilitation, where he gets to meet other people and learn woodwork and how to manage computers.

However, Liddy says Sam, now 60 years old, is expected to deteriorate as he ages.

“There’s no happy ending here. We just exist day-to-day. We can’t do what we want to do and the pressure of communication is just intense. It’s really bad.

“Now he’s having problems with his one eye, so he’s now worried about being fully blind. There’s no upside at all, really.”

HIS PRIDE AND JOY: Sam Wanoa has been unable to ride his beloved Harley Davidson since suffering brain damage in a brutal assault six years ago. He remains passionate about motorcycles. Sam and partner Liddy Hayllar have been dealt another cruel blow, with the house they rent being sold, which could leave them homeless given the current housing situation and their financial position. Picture by Rebecca Grunwell