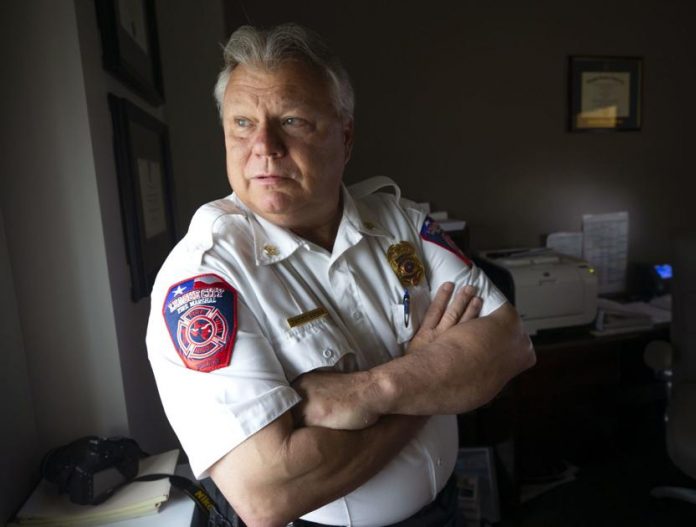 Tommy Cones, League City’s fire marshal, is among a growing number of residents who have contracted, endured and recovered from the coronavirus.

He summarizes the two-week ordeal and its myriad debilitating symptoms succinctly.

“It was pretty much like I was run over by a truck,” Cones said.

Cones, 60, said he first began to feel ill March 20 and initially thought he had a sinus infection. Over the next two days, Cones’ wife began to show the same symptoms. Because sinus infections typically aren’t contagious, Cones began to worry. Then, each of their conditions rapidly deteriorated, he said.

By March 23, Cones knew something was very wrong. He started having difficulty breathing, was coughing a lot and experienced diarrhea, loss of appetite, fever, loss of taste and smell, bad back and knee pain and fatigue, he said.

After it was discovered that a handful of Cones’ coworkers at League City’s fire administration office also were showing the same symptoms, he was tested for the coronavirus, also known as COVID-19, on March 24. Two days later, the results came back positive.

Already self-quarantined at home since they first started showing symptoms, Cones and his wife endured roughly two weeks of feeling the effects of the virus. Cones’ condition was at its worst about midway in the two-week period.

“I was really getting fearful because my breathing got really bad,” Cones said. “The best way I could describe it is it feels like someone is stepping on you, and you’re trying to get air and you’re having problems breathing in. The cough was a dry cough, which was extremely irritating. That worried me because I just felt like we were having the early stages of pneumonia.”

On March 26, Cones and his wife checked themselves into an emergency room and asked to be tested for pneumonia. Both tested negative and did not require hospitalization, he said.

“I’m a pretty healthy guy otherwise, and the difficulty breathing really opened my eyes quite a bit because it just seemed to attack your respiratory system pretty badly,” he said.

“There for a while, there was a lot of touch and go,” Cones added. “I could certainly see where people with asthma and smokers and different areas of concern would have some major problems.”

League City Mayor Pat Hallisey said he regularly checked in with Cones, his friend of nearly 40 years, and was taken aback with how hard Cones was hit by the virus.

“He’s stout,” Hallisey said. “He’s in good shape; he always has been, but it knocked him off his feet.

“It just crumbled him, and when he was down with it, he was hurting,” Hallisey said. “I’d call over there to check on him in the evenings, and his voice was weak. There was no enthusiasm in there, which is pretty odd for Tommy.”

The loss of appetite and fatigue lingered on, even after the fever broke, Cones said. As April started, he slept a lot, and his appetite slowly returned, although both food and drinks had a very salty taste, he said.

Cones was cleared by the health department last Saturday, and on Wednesday he returned to work at the League City fire administration office — where six other city employees were infected — after the office was reopened.

“I feel really good, and I’m glad to be back at work,” Cones said.

Cones said his physician told him now that he’s had the coronavirus, he has developed some immunity to it. But, Cones will still be taking precautions, he said.

“I’m not going to go out there and give it another shot,” Cones said. “One time is plenty.”

Having gone through the coronavirus, Cones urged residents to take stay-at-home orders, social distancing and the fast-spreading virus seriously.

“Don’t think that we’re on vacation and we should be running around and having a good old time,” Cones said. “It’s something you should take seriously.”