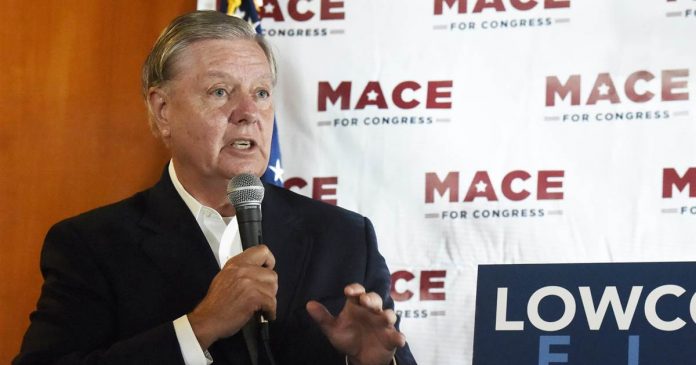 CHARLESTON, S.C. — Sen. Lindsey Graham had a base problem. Then a Supreme Court seat opened up.

There’s no question that Graham, a South Carolina Republican facing his most competitive re-election battle yet, needs every vote he can get in November. A Quinnipiac University poll from early this month showed him tied at 48 percent with Jaime Harrison, a well-funded Democrat, in a solidly red state that Donald Trump carried by 14 points in 2016.

Graham began his Senate career in 2003 as a moderate with allies on both sides of the aisle. His willingness to work with Democrats drew frequent criticism from the right. For much of the 2016 Republican presidential primary, Graham warned the party of Trump, calling him a “race-baiting, xenophobic, religious bigot.”

Now, he is one of Trump’s closest allies in Washington and a frequent golf partner.

Many Republicans here have never fully bought into Graham’s 180-degree change, party leaders in South Carolina say. Some base voters still worry that he is not close enough to Trump, while others are frustrated that they don’t seem to know who the real Graham is anymore.

“Graham has always had issues with the Republican base, dating back to 2008,” said Will Folks, who worked for years in Republican politics in South Carolina and now runs the state’s go-to political blog, FITSNews, adding that Graham lost a meaningful number of Republican primary voters to challengers in his 2008 and 2014 re-election bids. By comparison, the state’s other senator, Tim Scott, a Republican, did not have a primary challenger in his 2016 race.

“I’m a libertarian and I’m not going to vote for him. I’m just not,” Folks said of Graham. “And if that means putting a Democrat in for six years until the GOP can get a better candidate, then so be it.”

But the death of Justice Ruth Bader Ginsburg could provide Graham with a critical opportunity to prove his loyalty to the base, shoring up his support in the final few weeks of the election.

On Saturday, less than 24 hours after Ginsburg died, Graham — who chairs the Senate Judiciary Committee — announced he would support moving forward with a Trump Supreme Court nominee. The position marked a complete reversal from his position in February 2016, when he refused to consider President Barack Obama’s nominee, arguing that it was too close to the election and voters should have a say.

“I want you to use my words against me. If there’s a Republican president in 2016 and a vacancy occurs in the last year of the first term, you can say ‘Lindsey Graham said, ‘Let’s let the next president, whoever it might be, make that nomination,'” Graham said at the time.

Harrison took him up on that offer, tweeting out a video clip of Graham’s comments, adding: “My grandpa always said that a man is only as good as his word. Senator Graham, you have proven your word is worthless.”

Still, South Carolinians are divided on which candidate the open Supreme Court seat will actually benefit. Republicans say it reminds voters that Harrison is, well, a Democrat — while Democrats say it reinforces Harrison’s attacks against Graham: that he’s just not the same guy that the state elected 18 years ago, and that South Carolinians can’t trust him.

“On both sides, it changes the race,” said Barbara Nielsen, who works for the Beaufort County Republican Party, a key district that runs down the South Carolina coast. “But I think we’re still a Republican state.”

Former South Carolina Gov. Mark Sanford, a Republican, said that “it probably helps Democrats more than Republicans because they are incensed.”

In York County, a rapidly growing part of the state that includes part of the Charlotte suburbs where Harrison will need to post a strong showing, Democrats say they’ve never seen this kind of excitement for a candidate before — and that it has shifted into high gear in the days since Ginsburg’s death.

“The phone number for our county party HQ rings through to my cellphone, and it rings constantly. It’s more energy that we’ve seen around here for any race,” said John Kraljevich, chair of the York County Democrats, as he loaded Harrison yard signs into his truck to drop off to eager supporters around the state. “A lot of the energy we were feeling is frankly close to panic. It’s like: ‘Oh hell, we can actually win this race. What do we do now?'”

H. Gibbs Knotts, a political science professor at the College of Charleston, predicted that the impending partisan battle of the Supreme Court will have a “split effect.”

“It may end up canceling each other out. I don’t know that one party has a huge advantage,” Knotts said. “I do think it’s going to help Graham. Obviously he’s going to get in the news a lot. But I do think it allows Harrison to continue the narrative of ‘We can’t trust Lindsey, Lindsey isn’t a man of his word.'”

Still, Sanford said, the partisan breakdown of the state cannot be overlooked.

“Yes, it is a tight race. Yes, a lot of money has been spent. But at the end of the day, it’s South Carolina and it probably goes Republican.”