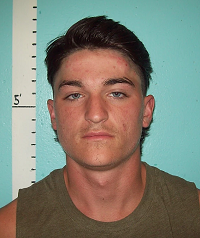 STETSONTOWN TOWNSHIP – A Litchfield man faces multiple charges this week after he allegedly stole and damaged a truck as well as removed several items from a camp.

According to an affidavit filed with the Franklin County court by MSP Cpl. Jonathan Russell, police became involved after receiving a report of a vehicle off the road on the Kennebago River Road in Lower Cupsuptic Township in Oxford County. Russell was told that the vehicle, a Dodge Ram, had been taken without permission from Grant’s Kennebago Camps in Stetsontown Township. Another individual reportedly informed Russell that the stuck truck could be connected to the same person that had taken a logging truck from a log yard in Davis Township – that vehicle had also gotten stuck on the Kennebago River Road and had been damaged after its drive shaft broke. In the affidavit, Russell found the truck further north on the road and did see that the drive shaft had been sheared off and was hanging from the building.

As Russell was photographing the second scene, another pickup truck arrived. The operator told Russell that the person responsible for the stuck vehicles was in the back of the truck. A man, later identified as Mason, exited the truck and spoke with Russell. According to the affidavit, Mason admitted to taking the Dodge the previous evening. Mason reportedly said that he had been “driving around Kennebago River Road, drinking alcohol and having a good time,” according to Russell’s affidavit, and that he had taken the logging truck to try and free the Dodge after the pickup became stuck. Instead, the logging truck also became stuck and was then damaged.

Upon being questioned by Russell, Mason also reportedly admitted to entering a camp, drinking some beer and hanging out for a while before leaving with a shotgun. Mason showed Russell the camp, explaining that he had entered by removing an exterior screen from a window. Mason also brought Russell to a friend’s vehicle, where he allegedly had stowed the firearm and other items. Per the affidavit, Russell did retrieve a shotgun as well as a red backpack and a green jacket that had also allegedly been taken from the camp. Inside the backpack was several unopened beers that were still cold, loose change, fireworks and three set of binoculars.

Mason was arrested and transported to Franklin County Detention Center. Bail was later set at $500 cash or a Maine Pre-Trial Services Contract, with conditions to include no use or possession of alcohol or burglar tools, with random search and test for same, as well as no contact conditions with Grant’s Kennebago Camps and two people associated with the case.

Victorian truck drivers are being abused by South Australians who are...