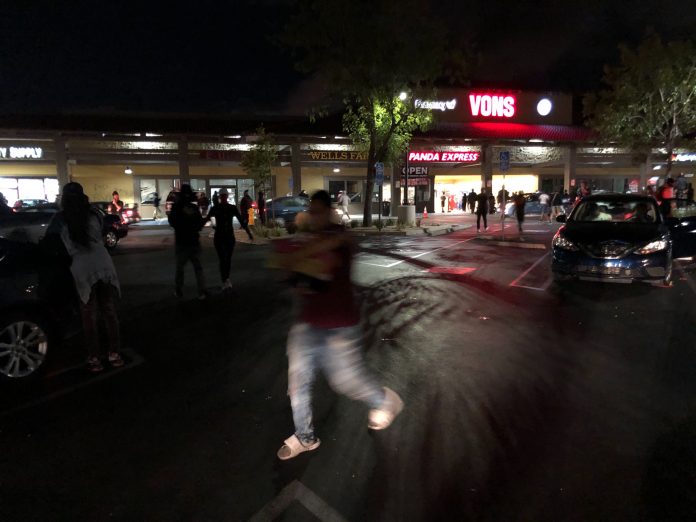 The Chase Bank on Spring Street, across the street from La Mesa Police Department was fully engulfed in flames. The fire started sometime after 11 p.m. Saturday.

The nearby Union Bank was also on fire.

Sheriff’s deputies are holding spectators back away from the fires as firefighters attempt to douse the flames.

The Los Angeles mayor says National Guard troops will be deployed overnight as violence continues in the nation’s second-largest city. The order comes as California Governor Gavin Newsom declared a state of emergency Saturday night as protests in the city turned violent.

Mayor Eric Garcetti said Saturday evening he asked Gov. Gavin Newsom for 500 to 700 members of the Guard. The mayor imposed a curfew on the city after crowds torched police cars and burglarized stores.

The California National Guard is being deployed to Los Angeles overnight to support our local response to maintain peace and safety on the streets of our city.

Everyone was ordered to be off the streets until 5:30 a.m. Sunday. Clashes between protesters and lines of police officers came after an initially peaceful gathering. More than 500 people were arrested during clashes downtown Friday night. The new violence is centered in the Fairfax section west of downtown.– Associated Press, Shalina Chatlani

People took bats to stores windows, broke in and started looting, taking items from balloons to alcohol and food. Both the Vons supermarket and Play It Again Sports caught fire, as well as the Chase Bank on Spring Street.

Law enforcement from several departments, including the San Diego County Sheriff’s Department, responded to the shopping center to disperse the crowd. Some were in riot gear.

Down the road, a vehicle was on fire in front of the Plaza La Mesa Shopping Center. Looters also raided the Walmart at Grossmont Center, where there was no police presence.

Earlier in the night, protesters tried to flip over a Heartland Fire Truck but failed and ended up setting the pick-up truck on fire in front of City Hall. Protesters also vandalized and tried to set City Hall on fire. They broke windows and spray-painted the building.

Vons supermarket and the Play It Again Sports store is on fire in the La Mesa Springs Shopping Center.

Every store in the La Mesa Springs Shopping Center has had their windows broken and there is not a police presence in sight.

People are running in and out of Von’s, with carts full of goods and several store windows have been broken.

Two vehicles are also engulfed in flames in front of La Mesa City Hall. Law enforcement has fired rubber bullets and tear gas into the crowds.

Around 6 p.m. the crowd started throwing water bottles and rocks at law enforcement. That’s when deputies fired rounds of rubber bullets, pepper spray and tear gas into the crowd.

The crowd momentarily dispersed but many have since returned, remaining in the parking lot in front of the building.

Some protesters had painted graffiti on the station’s walls and broke the windows.

Around 8 p.m, authorities fired a barrage of tear gas and flashbangs at the crowd to clear the parking lot in front of the station. Dozens of law enforcement vehicles moved in right after to try to disperse the crowd.

Earlier in the afternoon, protesters had peacefully marched in front of the department to demonstrate against ongoing police brutality across the U.S.

Protesters then marched onto Interstate 8, blocking the freeway in both directions around Jackson Drive. The freeway remained blocked at 8 p.m.

Earlier this week, a La Mesa police officer detained a black man at the Grossmont Transit Center Wednesday. The man was arrested on suspicion of assaulting an officer and the encounter was videotaped and appeared on social media. — Alexander Nguyen, KPBS web producer

An estimated 1,000 protesters blocked Interstate 8 in both directions Saturday to demonstrate against a police officer who detained a black man earlier this week.

About 2:30 p.m., the crowd initially took over the La Mesa Police Department parking lot to protest an officer who detained a man at the Grossmont Transit Center Wednesday. The man was arrested on suspicion of assaulting an officer and the encounter was videotaped and appeared on social media.

The protesters chanted “Black lives matter” and carried signs such as “no justice, no peace,” as they marched down University Avenue.

At first, the group was stopped when they tried to get on I-8 at the Baltimore Drive entrance by California Highway Patrol officers. But soon after, the protesters broke through the CHP line and continued marching eastbound on the freeway.

The CHP then halted traffic on I-8 eastbound and when protesters began marching on the westbound side, traffic was then halted on that side of the freeway.

Saturday’s protest follows a Memorial Day incident in Minneapolis when a police officer, Derek Chauvin, was videotaped pinning George Floyd to the ground with his knee on his neck, which eventually led to Floyd’s death. Chauvin was arrested and charged with third-degree murder and manslaughter on Friday.

Outrage over Floyd’s death built across the country and many protests have turned into rioting.

La Mesa officials said they are launching an outside investigation into the Wednesday incident. — City News Service

Bids opened for demolition of former silk mill in Wilkes-Barre |...