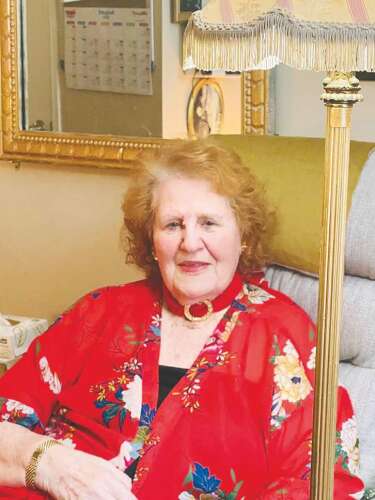 Mary Parker loves life and has much to remember. The young girl who always wanted to be a dress designer is now 91. Every day Mary still plans her outfit and puts on make-up. She recounts stories from her life to Sophie Rishworth in her room at Kiri Te Kanawa Retirement Village earlier this month . . .

Walking into Mary Parker’s room is like walking into a bygone era — antiques line the walls, and a tall elegant lamp lights the room. Mary sits rather regally in her Victorian chair.

Mary (nee Crawford) was born on May 26, 1929 on the border of Scotland. One of seven children, they were not allowed to go to school past 14. They had a strict father who insisted they work on the farm they had in Dedham Village, Essex. World War 2 raged around them. They’d spend hours in their air raid shelter if the sirens went off.

Mary remembers they were very poor growing up. Their farm was a life saver as it provided food for their large family and an income as well. They had 4am starts to work in the fields. Mary remembers her mother always had a beautiful breakfast of bacon and eggs ready — a luxury afforded to them during the war because they had the farm. But Mary said she hated it — until the Americans came and built an airfield beside their farm.

“I met this lovely pilot. His name was Dan Pennell from North Carolina.”

They fell in love and frolicked in the corn fields. She was 16 and he was 23. He wanted to marry her but Mary’s father said she was too young. After 15 months together the war ended. He returned home, telling her he’d come back for her.

Mary checked every day for a letter and finally one came. She fled up the stairs to read it but then let out an almighty scream. Her American pilot had asked for another photo because, “My wife has torn up the other one”.

Horrified he had been married all the time, her father grabbed the letter and threw it in the fire — his address, the only means of contact, gone.

“I never got over it — I still think about him and wonder how his life went.”

Mary said she couldn’t stay at home after that. There were too many memories — they had carved their names and love for each other over many trees on the farm.

“So I married on the rebound after that.”

Her first husband was 20 years older than her — part Spanish and very good looking, she said. He was a hard worker, and dug drains along the country roads.

She became Mary Hickland and together they had four sons. They moved to Australia briefly, then in 1962 took a ship across the Tasman and moved to New Zealand with their children aged 4, 6, 8 and 10.

Mary hoped the change of country would change their unhappy marriage, but it didn’t.

The family moved to Gisborne in the early 1960s and bought a cottage on Lytton Road for 1000 pounds. It had a wood stove and a tin bath. They didn’t have much money and used orange boxes for seats. But Mary would attend auctions at Barwicks and slowly turned it into a home.

Her sister Peg joined her in New Zealand. They started going to church and became Christians. Both ambitious women, they decided to open an antique shop having never even used a cheque book. In 1969 — a few years before they both got divorced — The Curiosity Shop opened on the corner of Derby Street and Childers Road. They would bike in every day, and on Fridays went to the Barwicks auctions.

“We would bid for pieces that were out of this world. We couldn’t stop buying.”

Barwicks cottoned on and planted a bidder who outbid them every time. Frustrated, and suddenly low on stock, the sisters prayed.

“Then we saw an ad in the paper. It was a tender for the contents of an old villa in Argyll Street. It consisted of three generations from Ireland. We gingerly went to the Public Trust and made an offer of 300 pounds.”

They got it. The estate included chaise lounges, Victorian chairs, kauri tables, brass buttons and more.

“It was a dream, and an answer to prayer.”

It got better — when they moved the furniture, diamond and ruby rings fell out of the chairs. Trying to be honest they took them to the Public Trust.

Their answer was “They’re yours.”

The exciting haul made the sisters enough money to buy a Morris pick-up truck for the business.

Then another ad in the paper led them to the loft of an old state house in Gisborne and “the most beautiful things”.

Their offer of 200 pounds was accepted.

The next break was when a “great big man” came into their shop one day.

“He looked like Al Capone, we were a bit frightened.”

The man asked Peg and Mary if they had any coins or artefacts in their store.

“He was very abrupt. We told him it was hard to get things. He told us he was a dealer from Auckland, who had been dealing for over 50 years.”

The man invited them down to the showgrounds, where he was staying in a caravan. The sisters weren’t sure if it was safe to go but braved it anyway.

It was with relief that a lady, his wife, answered their knock on the door. Inside the small caravan were lines of rope from one end to the other, covered in linen.

The dealer, Bob, explained he had been a dealer during the Depression. Many diamond rings he had bought for as low as one pound — so desperate had people been for money.

He told Peg and Mary he had never let anyone else know just how much he had accumulated. But now he wanted it off his hands and cut the sisters a deal.

They watched as he pulled the sheets off to reveal rows and rows of diamond rings, ruby rings, gold chains and watches. Mary estimated there were 2000 diamond rings alone. The sisters were speechless.

Bob told them once a month he would send them 10 diamond rings, 10 chains, 10 watches and 20 wedding rings for a small price.

“We didn’t believe him.”

But true to his word the jewellery arrived at their store. They tried to get them valued but the jeweller refused — they thought it was because they were competition to him.

“So we doubled the price we had paid and took a chance,” said Mary.

The jewels were all real. They flew out the door, customers came from all over. One lady bought three rings and insured them for thousands. So they upped their prices.

After three years the sisters sold up and returned home to England to visit family. Both in their 40s they continued to buy antique items. When they returned to New Zealand they had six big car crates full of treasures sent back by ship.

But when they went to collect the crates in New Zealand, they discovered five had been emptied and filled with newspaper. They had no insurance. It was a hard hit but the sisters had tenacity and were able to buy their old shop back.

They needed a bigger space and went into partnership with a man to rent the shop on the corner of Roebuck Road, now a cycle shop. That business trio didn’t work. So the sisters opened their third shop in Auckland.

A man walked in one day and became Mary’s second husband; he was 10 years older. The marriage lasted 11 months, ending early one morning, when Mary fled.

She found herself penniless but landed a job looking after a wealthy elderly couple. When the elderly gentleman died he left her a car, boat, home and diamond rings. Back in Gisborne, in December 1992, Mary Parker met her third, and favourite, husband. It was a blind date, they had only communicated by post. Terrence Parker told Mary he would be wearing brown trousers, a cream shirt and a brown tie.

“I wouldn’t tell him what I was going to wear in case I didn’t like the look of him,” said Mary.

Terrence wrote he would be outside Deka on Gladstone Road at 10am. He must have known it was her, as his lovely smile captivated Mary immediately. He told her she was the one. Seven weeks later they married at St Andrew’s Church — Mary was 63 and Terrence was 73.

“He was the most romantic man I’ve ever met.”

They enjoyed 20 years together, often visiting resthomes in Gisborne with Terrence on the keyboard and Mary singing.

They opened an antique shop — Mary’s fourth, but a first for Terrence who had been a grape farmer.

Their wedding photo, framed in gold, hangs in her room. She thinks of him every day and remembers fondly his love, care and gentleness.

They had “the most gorgeous love” until he passed away at 94.

Tragedy rocked her life in 2000 with the murder of one of her sons, 30-year-old Allan Hickland.

Her secret to a happy life is keeping a sense of humour, and to have plenty of love. Her family has longevity in their genes — sister, Peg, is 90 and lives in Mission Bay, Auckland, they have another sister who is 96 and a brother who is 94. They all still keep in touch regularly.

Mary says she feels blessed to have led an interesting life.

“I’m glad I was presented with the word of God when I arrived in this country, and have been reading the Bible for 55 years.”

During her US honeymoon with Terrence they attended a church service in Arkansas. The Sunday School was so run down, Mary decided to donate two diamond rings and a watch if other members of the parish pitched in too. They did, and today there is a Sunday School in Arkansas partly funded by Mary.

Mary and Terrence Parker were married in 1993.

Emergency crews searching for 2 people after pickup truck drives off...

Time to hit the links for a good cause

Self-Storage Rooms Coming to U-Haul at Preston Hwy. in Louisville