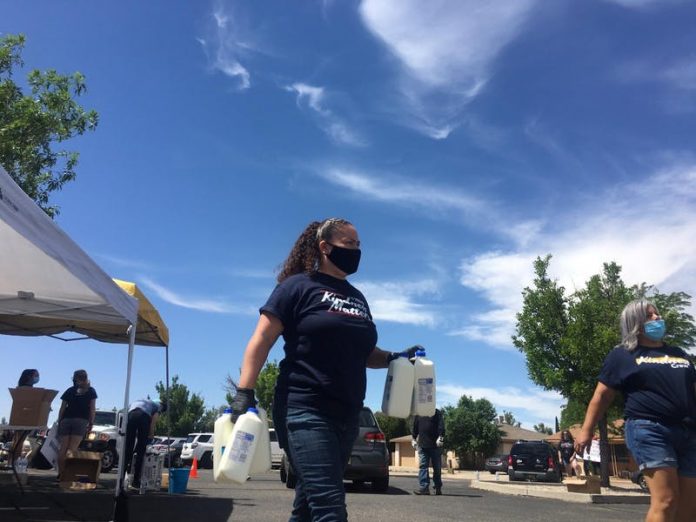 The free drive-thru food distribution was set to take place from 9-11 a.m. at the Harvest Fellowship Church parking lot, but cars were lining up as early as 6:15 a.m. to get food. The church partnered with Convoy of Hope to provide two semi-trucks full of supplies for a total of 22 food pallets to give away.

“We’re just trying to help as many people as we can,” Harvest Fellowship Church Pastor Jason Dickenson said. “We know in this crisis that one of the biggest needs is just food insecurity. There are tons of families who have lost jobs, and they’re starting to feel that pain two months in.”

Dickenson said with the help of Convoy of Hope, as well as multiple other local supporters, they had enough resources to serve approximately 600 families. The New Mexico United soccer team donated yellow capes for children to play with at home.

“We call it Convoy of Hope Albuquerque because I’m also hoping that people will leave, not just with the groceries, but with some hope,” Dickenson said. “You know that, ‘Hey, we live in a great city. People want to take care of each other. There’s a church community who loves me, and we’re going to get through this.’ And I’ve seen it. People are coming in with tears in their eyes, and I think the hope is almost tangible today, and that’s what we really wanted.”

Over the past two years, Dickenson said Harvest Fellowship has been involved with larger food drives on a city-wide scale at the Albuquerque Convention Center, which sometimes attracted more than 5,000 people in a day. However, he added that this year was the first time they targeted their resources to mainly provide food for coronavirus victims.

The amount of food distributed to each car was determined by how big the family was. Upon entering the parking lot, a volunteer would ask the driver their family size and write that number on the windshield. Then after driving through the assembly line of resources, other volunteers would clean their windshield off before the family leaves.

Dickenson said most of the volunteers were members of the church community. He said Harvest Fellowship sent an email asking “who’s ready to love our city” which received over a hundred volunteer signatures within the first hour.

One of those volunteers was University of New Mexico student Shyanne Martinez, a senior and elementary education major, who is a member of Harvest Fellowship. Martinez held up signs of encouragement while people drove by to pick up food. The signs said things like “have a great week,” “spread hope faster than fear” and “hope isn’t canceled.”

“It’s really awesome that all these people came out and volunteered and we were able to help impact people in need, and I think that’s just a really big testament to what we do here,” Martinez said.

Although Harvest Church received two semi-trucks full of groceries from Convoy of Hope, they only used one truck for this event. The other truck will be sent to the Indian Pueblo Cultural Center on May 29 to aid Native American families. The food drive will start at 10 a.m. and continue until all the supplies are distributed.

Daniel Ward is a senior reporter at the Daily Lobo. He can be contacted at culture@dailylobo.com or on Twitter @wordsofward34

Forget the river: Event series will bring music to the people