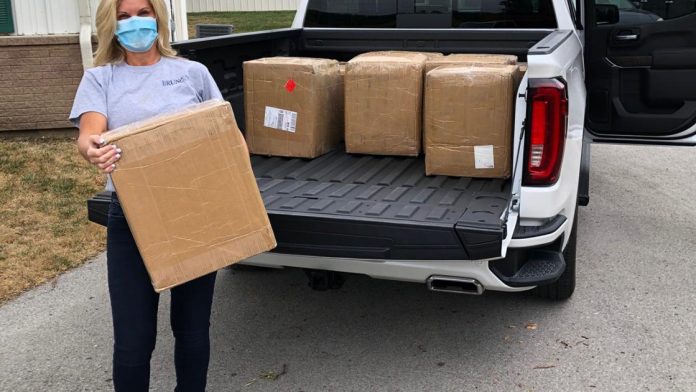 Brunow began to put out feelers to her PPE suppliers about getting N95 masks, surgical gowns, booties, surgical masks, and face shields shipped to her office at 1851 Madison Ave.

At the same time, Brunow began reaching out to her federal, state, and county government contacts to gauge their needs. Demand was high, and immediate.

“I have a strong track record of working with the government, so we just started one by one with the different agencies,” she said.

Brunow herself is delivering orders across Iowa every week to state agencies, including the Hoover State Office Building in Des Moines, the Iowa Veterans Home in Marshalltown, the Glenwood Resource Center, the Iowa Department of Corrections and a dozen others. She’s putting as many as 5,000 to 6,000 miles on her truck every month, but prefers to deliver the PPE herself rather than risk delayed shipping and deliveries to agencies who need protective gear quickly.

Ordering PPE for the state prisons in Fort Madison and Anamosa required Brunow to find masks and other PPE that do not have a wire inside. The prisons asked Brunow to source wireless makes so prisoners could not use the metal as a weapon against guards and each other.

Justices Ponder Latin and Math for ‘Complicated and Important Case’

Everything You Need to Know About the Tesla Cybertruck