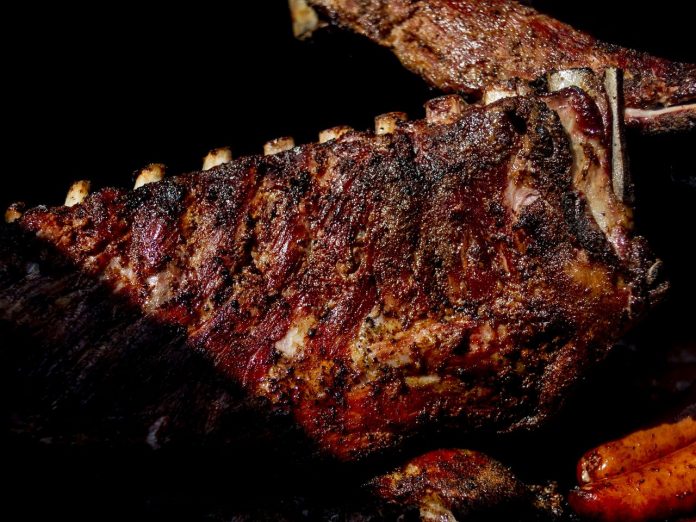 FLINT, MI — Cedric Shields would give away a free chicken wing to every car that came by when he started selling his barbecue in 1999.

When he started out, the Beecher High School graduate and lifelong Flint resident would cook on a small barrel grill outside of a drive-through store at the corner of Welch Boulevard and Chevrolet Avenue in Flint.

Shields said he first stared barbecuing when he was a kid living in the Sunridge Apartments in Flint. He would barbecue chicken every day.

“The guy below me was like, ‘Bro is your stove broke? Why are you barbecuing every day?’ And I was like, ‘Bro, I’m just trying to figure this … out,‘” he said.

From his first location, Shields moved to a spot on Clio road at a liquor store across from Auto Zone. His father eventually started a restaurant called “O Taste and See” at a location on Bristol Road where Shields was the cook. Shields then started his own branch of the restaurant on Welch before moving to the current food truck location on Flushing Road.

While his father supported his love for barbecue, Shields said he got his family into the business.

Everything on the menu is worth trying, Shields said, but if people have to pick one thing, they have to try the ribs. Mason jar lemonade from Southern Drinks & Eats, owned by Michael Taylor, is also a popular item sold out of the truck.

Shields said his barbecue style is “low and slow.” He said he also likes to mix different kinds of wood to create a unique smoked flavor. His pit is 17 years old and the flavor meat gets from it can’t be replicated, he said.

Since he was a kid, Shields said he never lost his love for barbecue. He gets up every morning around 6 a.m. to start cooking and has never stopped loving what he does.

Now, he said he gets to share his passion and business with his family. Sheilds said his 8-year-old daughter is “the boss.” His son, Cedric Shields Jr., 18, worked the pit Thursday, Aug. 6. His girlfriend and 20-year-old son also help with the food truck.

Suspect in custody after dragging Littlefield officer with SUV