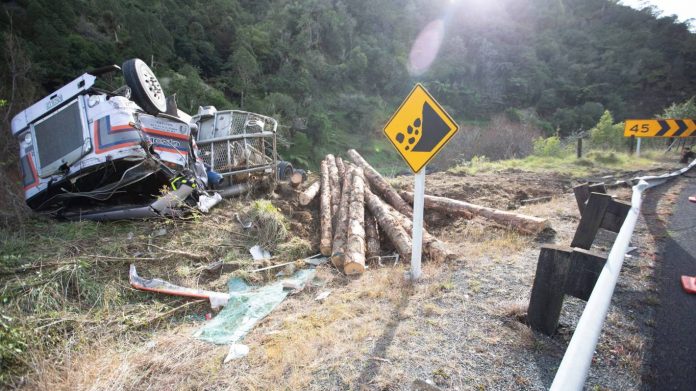 The logging truck crashed after coming off SH3 in the Awakino Gorge on Monday morning.

A fully laden logging truck has overturned in the Awakino Gorge on State Highway 3, 90km north of New Plymouth.

The GJ Sole truck, which was towing two trailers, crashed through a road barrier about 9.10am on Monday and came to rest upside down, with its load of logs spilled down the bank towards the river.

Inquiries were continuing to establish what had caused the driver to lose control, he added.

“It appears the truck has come around a sharp left-hand bend and rolled and crashed through the barrier.”

The driver was taken by ambulance to Te Kuiti Hospital.

The police Commercial Vehicle Inspection Unit will examine the vehicle.

The trucking company was responsible for removing the truck, Murphy said.

Graeme Sole said the driver, who had been with the company for quite a while, was fine and had been taken to hospital to be checked out.

Sole said you just never knew when accidents were going to happen and police were investigating the cause.

Pence heads to Ohio for unveiling of electric truck