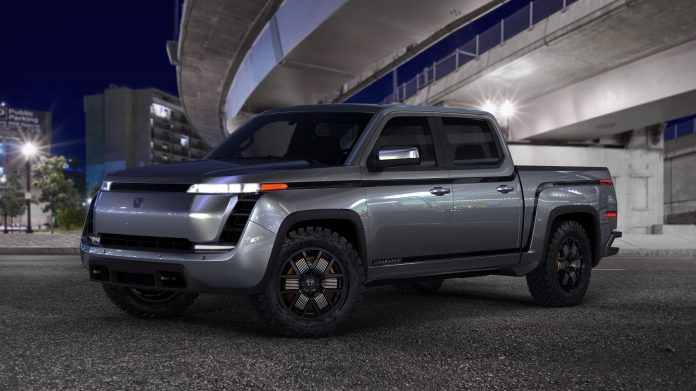 The next time you might be considering an F-150, Silverado or Ram pickup, Lordstown Motors CEO Steve Burns wants you to know something.

“If you’re stuck in the mud next to a traditional pickup, we’ll come out first,” Burns said of the all-electric Endurance pickup that his company will start selling next year.

Some might say “them’s fightin’ words” in the truck wars. But it’s not only getting out of the mud that Burns bets the Endurance can do first.

“It’s a very difficult business to break into and it’s been dominated by names that have been here for a long time,” Burns said in an interview with the Free Press. “But you don’t see anybody dedicated exclusively to light-duty all-electric trucks and we will be dedicated to it.”

Lordstown Motors had planned to reveal the Endurance at the Detroit Auto Show next month but the show was canceled because of the coronavirus pandemic.

So Lordstown Motors will do a “virtual” reveal instead, likely in late June. After that, Burns expects to take pre-orders for all 20,000 pickups the automaker will build next year.

For now, Lordstown Motors is releasing new photo renderings of the truck to the Free Press.

There is demand for an electric pickup, Burns said. Last year, there were 2.5 million full-size pickups sold in the United States, according to Kelley Blue Book data. Burns said the Endurance will be first to all-electric pickup market, thereby capturing a chunk of that gigantic segment.

“You don’t create need, there is a demand for this,” Burns said. “We will be the first electric work truck and nobody will have that for years.”

Indeed, GM and Ford plans for electric pickups are further out. Currently, Lordstown Motors is rushing to retool its facility near Youngstown, Ohio, to build 30 pre-production Endurance pickups by December and start building 20,000 production models in 2021.

Here are where the Detroit Three stand on electric pickups

“It’s very rare in the auto business to get a clear lane,” Burns said. “The No. 1 and 2 best-selling pickups in the United States don’t offer an all-electric pickup.”

When they do offer it, Burns said, they risk cannibalizing sales of their internal combustion engine pickups by touting a greener, less costly-to-own alternative.

“We don’t have any legacy to protect,” Burns said. “We’re all dedicated to one mission and when you’re dedicated, you’re able to get there first.”

Burns insists the Endurance will match, even out perform, a traditional gasoline pickup in every way.

“We expect it to be extremely rough and rugged, but it’s silent and fast. It’s strong enough to tow, but if you’re not towing it’s very fast,” Burns said, adding it can go from zero to 60 mph in 5.5 seconds.

And it can get out of a jam, such as the mud, because it has a precise, computer-controlled motor built into each wheel. The software slows down the wheels, preventing slippage, giving the vehicle better traction than a traditional pickup, Burns said.

Lordstown Motors is targeting fleet customers because those buyers are known to consider the “all-in cost” to buy it, fuel it and maintain it, Burns said.

The Endurance, built using components licensed from electric-truck maker Workhorse near Cincinnati, is priced at $52,500 and it’s eligible for the $7,500 instant tax rebate. The Ford F-150 and Chevy Silverado both start around $28,500 and can go up to $55,000 or more for top trim levels.

But with the Endurance, Burns said, there are no gasoline costs, in fact it is the equivalent to 75 miles per gallon. It is almost maintenance-free, too, with no big engine or moving parts to break on it.

It is a light-weight, all-wheel-drive vehicle. Four in-wheel computerized motors propel it. If a front right in-wheel motor malfunctions, the front left wheel’s motor will turn off automatically, allowing the driver to get home using rear-wheel drive, Burns said.

“So a typical gasoline drive-train has well over 1,000 parts. When you look at it that way it’s very prehistoric, it’s essentially a Model T,” Burns said. “We have four moving parts. It looks like a pickup truck on the outside, but underneath it’s electric vehicle 2.0.”

And with no engine in the front, pickup drivers finally have what Burns calls, “a frunk — a front trunk.”

The Endurance gets about 250 miles per charge, plenty for the average fleet driver who travels within a 60-mile area per day, Burns said.

As to how Lordstown Motors will go to market, Burns is still figuring that out. It could follow the traditional franchised dealer model, or sell it directly to consumers similar to the Tesla model.

“We thought we’d roll out our own dealer network, but we’re in discussions with people who have a national footprint and facilities that could service this vehicle,” Burns said. “That might be a route we take.”

Lordstown Motors will build the Endurance, the in-wheel engines and battery packs at GM’s former Lordstown Assembly plant, which it bought from GM last year. GM had built its Chevrolet Cruze compact car at the plant until last March when GM closed it and killed the car.

Lordstown was one of four U.S. plants GM said it would shutter in late 2018 as it ended production of some of its cars to accommodate shifting consumer tastes to SUVs and pickups.

GM’s Detroit Hamtramck was supposed to also be one of those four to close, but during UAW contract talks, GM agreed to invest $3 billion in it to make an electric pickup and several SUVs there.

As Lordstown Motors’ 70 employees, mostly engineers, work to retool the facility to build the Endurance, Burns is already planning flexible architecture to allow for more all-electric models in the future including a midsize pickup and an SUV, he said. The plant has capacity to make up to 600,000 vehicles a year, Burns said.

“We’ll have our second model out within a year of the launch of the Endurance,” Burns said. “We’re already planning it.”

For now, the company has been testing the early prototypes of the Endurance and Burns said it’s going better than they had thought.

“We’ve been testing the chassis and the range and the toughness of the vehicle,” Burns said. “The one thing you can’t get a feel for on paper is the handling. I’ve driven it and it drives like a sports car.”

Typically, when a pickup’s bed is empty, it doesn’t drive well because the engine is in the front and the weight is there, Burns said. In the case of the Endurance, the center of gravity is low and the in-wheel motors put weight on the four corners.

“This is a car without a gear, without a transmission and a drive axle, so there is nothing down the middle of the car. The only four moving parts are the wheels,” Burns said. “The result is the software that’s driving that and the suspension that’s driving it means you get a pickup that drives like a sports car.”

He said it has performed well in crash tests, too. But Burns knows there are naysayers who don’t believe traditional pickup owners will want an electric version, so why enter a truck war you can’t win? He believes he will ultimately win it.

10 Things to do across the North Fork in June