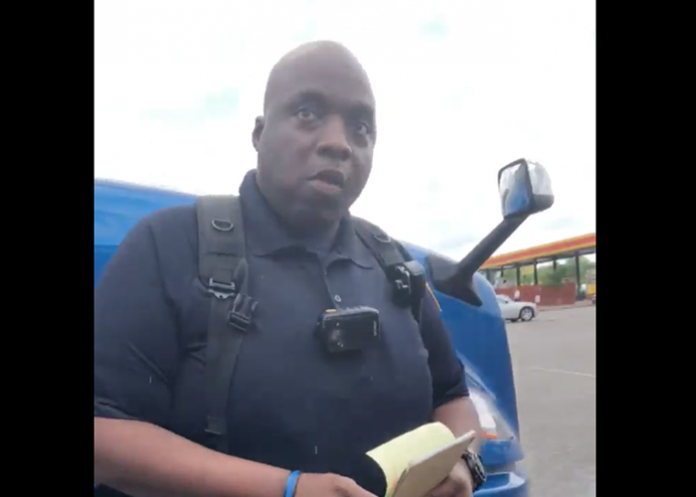 Love’s Travel Centers has issued a response to a video that went viral over the weekend involving security guard and a trucker at a Tennessee truck stop location.

On Sunday, May 17, truck driver Joshua Andrews became involved in a parking spot dispute that reportedly began when was awakened twice by security guards at a Love’s location on Lamar Avenue in Memphis, Tennessee.

According to Andrews, who was bobtailing at the time, a security guard woke him up and asked him to move to a different part of the truck stop parking lot to save room. Andrews said that he was woken up a second time and told to move by a different security guard who later identified himself as Officer Holton.

A dispute ensued between Holton and Andrews, which Andrews filmed on his cellphone.

As the two men walk into the store, Andrews turns the camera on himself and says, “At the Love’s here in Memphis.”

Holton responds by saying “At the Love’s. Gonna get your a$$ kicked…or shot. Make sure you record that too.”

“Are you threatening me now?” Andrews asks.

The two men consult with a Love’s manager, who ultimately gives Andrews permission to remain in the parking space.

Thought the video, Andrews repeatedly asks for information so that he can contact Holton’s supervisor, but is told by the manager that he would handle the situation.

The video has been viewed tens of thousands of times in less than 24 hours. You can watch for yourself below.

CDLLife contacted Love’s about the video and we received the following response:

Love’s takes this situation seriously and does not tolerate the behavior exhibited by the security guard in this video. The security guard in this video is not a Love’s employee, but we have contacted the company that sent him to our store, and he will not be allowed back on Love’s property. This conduct does not align with our values. Professional drivers keep America moving – especially at times like these – and we welcome them 24/7/365. Love’s proudly provides free parking for professional drivers at hundreds of locations across the United States.

In February 2020, a security guard shot a truck driver at a TA truck stop located in Oklahoma City, Oklahoma during a dispute over parking. The truck driver survived but suffered serious injuries. The security guard, reportedly facing a charge of assault with a deadly weapon in connection with the shooting, then took his own life using a rented firearm at a gun range.