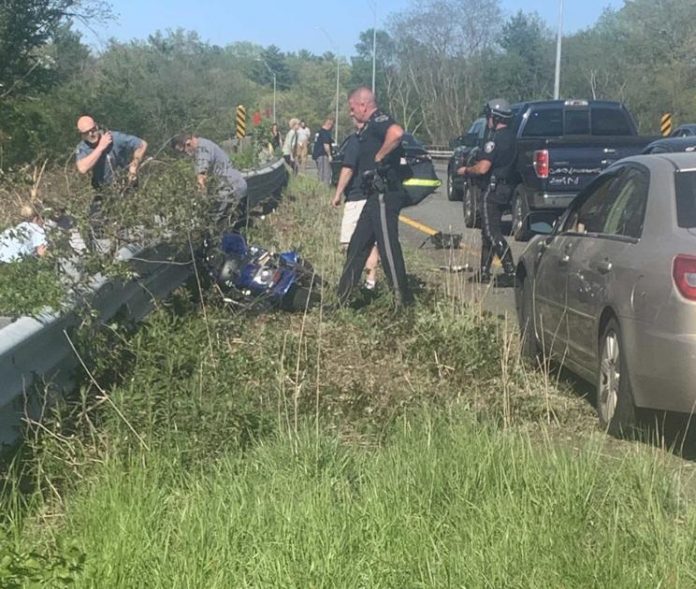 SALISBURY – A 51-year-old Lowell man died after he pulled his motorcycle to a stop into the media on the left side of I-495 north  near the merge with I-95 Friday afternoon and was hit by a Ford F-150 pickup swerving to avoid another vehicle, state police said.

Preliminary investigation indicated that Brian Barry, 51 of Lowell was driving a 1998 VL1500 motorcycle north on I-495 North prior to the merge in Salisbury. For unknown reasons Barry had pulled into the median on the left side and stopped, state police said in a press release.

A Toyota Camry that was traveling in the left lane braked when the operator saw Barry and believed he was about to pull into the left travel lane. A 2011 Ford F-150 traveling in the left lane swerved left into the median to avoid the Toyota. The Ford struck the motorcycle and Barry was throw over the guardrail. The driver of the Ford, a 77-year-old man from Turner, Maine, stopped and remained at the scene of the crash, police said. The driver of the Toyota, a 62-year-old woman from Douglas, also stopped and remained at the scene.

Barry was transported by MedFlight to Beth Israel Medical Center where he was pronounced dead.

The right and left travel lanes of I-495 North were closed for about half an hour.

Salisbury and Amesbury Fire/EMS and Police, and MassDOT were assisting with the crash scene.