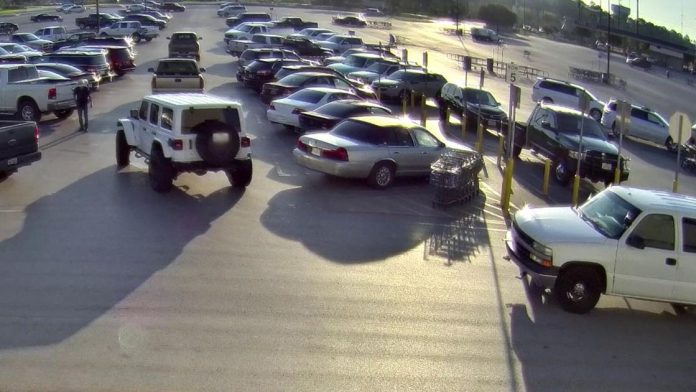 Lufkin police have released video surveillance footage of a suspect stealing $15,000 worth of fishing equipment from a professional fisherman’s truck last week.

A detective recovered the surveillance video showing a white or Hispanic man wearing a baseball cap, pandemic mask, blue shirt and shorts taking the equipment from the truck in the Walmart parking lot around 8:30 a.m. on Sept. 7, according to a press release from the department.

“If you carefully watch the surveillance video, you can see a flash of the camper being raised and lowered multiple times as the suspect moves several plastic totes of fishing gear into his SUV,” the press release states.

The video shows the suspect arrive in the parking lot in an older, white, police-style Tahoe, enter the store and exit shortly after, moving his vehicle beside the fisherman’s pickup truck.

The quality of the video was not sharp enough for investigators to make out a license plate, the press release states.

The fisherman who owns the equipment and his wife were in Lufkin from out of town for a tournament on Lake Sam Rayburn. The wife noticed the equipment was missing from the bed of their pickup after stopping by two stores that morning, according to a previous press release.

The department is asking anyone who can identify this man to contact them at 633-0356 or Crime Stoppers at 639-8477 to report anonymously.

No, Your Next Car Should Not Be a Crossover SUV •...