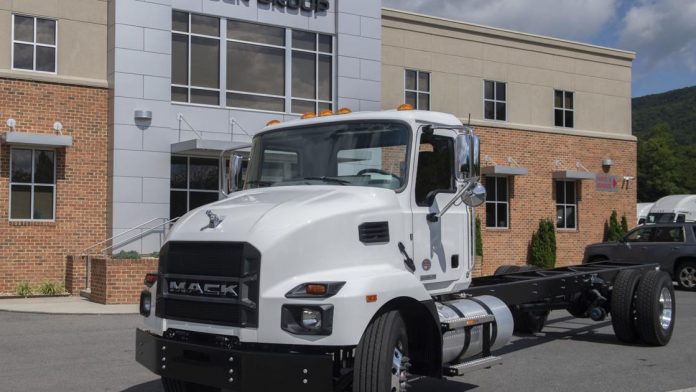 At that point, a new Mack Truck MD is born.

Brown went to the plant and picked up a unit for marketing purposes.

“I’ve taken it out on eight demonstrations. It’s been pretty well received by everybody,” Brown said.

Tim Kingerly, vice president of Power Line Rent-E-Quip in Roanoke, said his reaction to the new truck was positive. Power Line rents and sells work trucks for the utility, sign, lighting, telecommunications and forestry industries. The company buys vehicles and mounts aerial devices and bodies on them for the various applications. Kingerly expressed confidence that the Mack truck would perform well in the kinds of rugged settings his clients encounter.

“We were pretty impressed,” he said.

The new Macks are available in either class 6 or class 7, a designation that’s governed by the maximum loaded weight of the truck. Cummins makes the diesel engine used — it’s fire-engine red — while Allison makes the transmission. Brown declined to say how Excel Truck will price the truck, but said it will be comparable to other class 6 and class 7 vehicles. A hypothetical purchaser of such a truck could spend $60,000 or even $80,000, he said.

Medium duty is considered a more stable truck segment than heavy-duty, with its seesawing demand curve that sways with economic conditions. That’s due in part to the fact that a medium-duty truck can be equipped for dry or refrigerated delivery, a tank, hauling and dumping, or flat-bed applications.