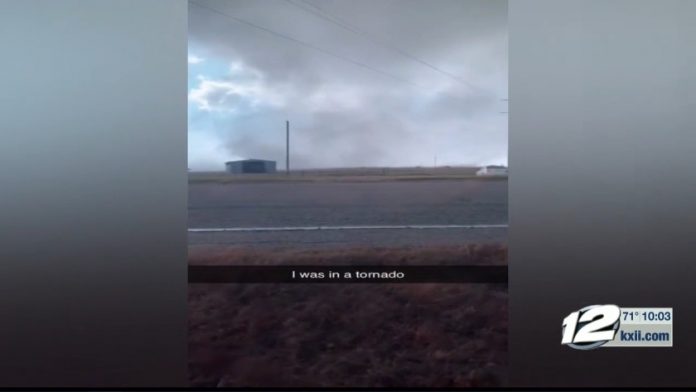 He was driving home from work Wednesday, when he got an unusual call from his dad- who just got a weather alert from KXII.

“He says something along the lines of.. there’s a tornado in Oakland, you need to pull over.” said Parker.

An EF-2 tornado, with estimated winds of 135 mph had touched the ground.

“I pull forward and as I’m going forward, I see a white car in front of me- so I hit the breaks so I don’t hit the car. About that time when I stopped, the back window exploded out of my pickup.” Parker said.

Parker said he was taking a video on his Snapchat, just moments before catastrophe struck.

“I slouched down like this and took cover.” Parker said.

His newly renovated Ford F-150 pick-up truck, destroyed, as the tornado ripped through US 377 and State HWY 99.

The car that was just feet away from him moments earlier, gone.

“I didn’t expect it. I said, oh wow that car is gone. I saw people running up and down the road in panic. It wasn’t traumatic, but it was intense for sure.” Parker said.

He survived with nothing but a scratch on his arm.

2021 Isuzu D-Max pricing and details revealed with segement-best safety and...