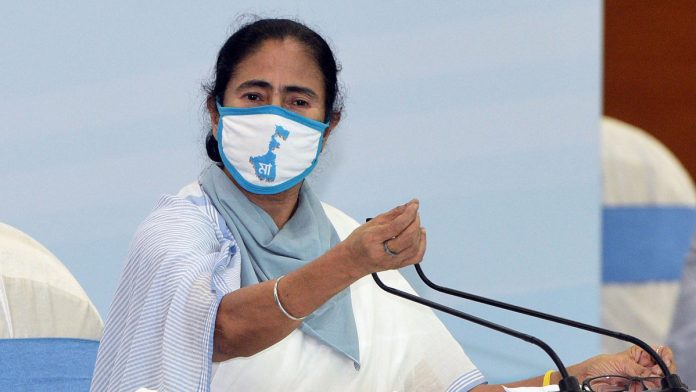 New Delhi: Bilateral trade relations between India and Bangladesh have taken a hit due to the West Bengal government’s decision not to allow imports from Bangladesh despite explicit and repeated orders from the Ministry of Home Affairs to the Bengal government.

Due to this “discriminatory” action by the state government, protests erupted at the Bangladesh side earlier this week, resulting in a stoppage of entry of Indian goods into Bangladesh. The Bengal government’s decision not to allow imports from the neighbouring country has been attributed to the fear of spread of Covid-19.

According to exporters in Bongaon (North 24 Parganas district) which has one of the largest land ports between India and Bangladesh called the Petrapole border, the absence of an order from the West Bengal government has halted all imports from Bangladesh. This has not been well received by the Bangladeshi counterpart who had been receiving Indian goods for the last 20 days without being able to send anything to India.

“The Bengal government has still not issued any SOPs for receiving imports from Bangladesh which has agitated the Bangladeshi exporters who have now stopped all exports from India. For the last four days, there has not been any export or import from any of the Indo-Bangla borders in Bengal,” an exporter from Bongaon told The Sunday Guardian.

Export-Import was stopped between the two countries from 23 March in the wake of the Covid-19 pandemic. The trade between these two countries had briefly resumed in May after which it had to shut down following protests from the neighbouring villages. Trade resumed in high capacity only on 7 June, but even then, imports from Bangladesh were banned and only exports from India to Bangladesh was taking place.

But after almost 20 days during which only goods were being exported from India to Bangladesh, the Bangladeshi traders and exporters decided not to receive any products from India unless India also starts receiving products from Bangladesh. The Petrapole Border, according to official figures, witnesses Rs 1,000 crore-Rs 1,200 crore trade every month, with at least 500-550 trucks moving across the border daily.

The problems for Indian traders, according to those who spoke to The Sunday Guardian, has further increased due to corruption by the local Trinamool Congress (TMC) leaders which includes the TMC controlled Bongaon Municipality.

One of the exporters from Bongaon, who did not wish to be named, told this correspondent, “The corruption of the TMC leaders is so widespread here that you need to pay a bribe to even move a truck from the Kalitala parking (this parking is controlled by the local TMC  Municipal chairman Shankar Addhya) to the Central government’s parking. The Kalitala parking is charging all exporters a parking fee from 23 March by issuing backdated parking entry receipts, even if their truck has entered the parking in June.”

Another transporter, whom this correspondent spoke to, said, “I had to pay Rs 15,000 extra as parking charge to the Bongaon municipality because they are charging parking fees from 23 March. They say that the DM of North 24 Parganas had issued an order on 23 March to stop parking in Kalitala and that order has still not been withdrawn so the municipality, citing that order, is charging a parking fee from 23 March even if a truck enters in July. Moreover, we are not receiving proper receipt for the parking fees being charged.”

The Sunday Guardian reached out to the DM of North 24 Parganas for a response on these allegations, but none was received.

Exporters have also alleged that the Bongaon municipality controlled parking has stopped giving out a list of the serial number of trucks in the parking which, according to them, has paved the way for corruption by illegally moving out trucks of exporters who owe their allegiance to the Trinamool Congress.

“We have been requesting for the serial numbers of all the trucks that are parked for export, but we are not being given that. This is being done because the Bongaon municipality chairman is charging hefty amounts of money from exporters for bypassing the queue and only those who can afford to pay the hefty bribe amount to the municipality chairman, only their trucks are being allowed to carry the export goods into Bangladesh. This is totally illegal. For example, on the night on 8 June, the Kalitala parking had released 100 trucks and on that very day, export of 140 trucks happened; where and how did those 40 trucks come?” the trader asked.

Dallas looking to start with all students in school, with restrictions...

Braised in the South food truck will settle down on Johns...

Christina Milian shows off her toned midriff as she works the Beignet...