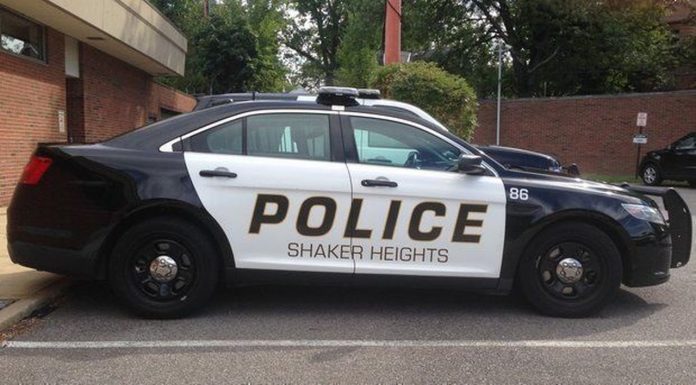 At 5:40 p.m. Aug. 31, a Shaker Heights man, 19, reported that someone who drove by in a four-door Chevrolet shot at him and the other occupants of his vehicle. Officers found bullet damage on the man’s truck.

No one was injured. Police are investigating.

At 3:35 p.m. Aug. 28, police arrested an intoxicated man who was creating a disturbance in front of Cilantro Taqueria restaurant, 20090 Van Aken Blvd. The Willoughby Hills man, 41, was charged with disorderly conduct.

At 12:55 p.m. Aug. 28, police were called to Heinen’s, 16611 Chagrin Blvd., where it was reported that a man stole food and ran from the store. Officers took descriptions of the suspect and soon after located him nearby.

The suspect, a Richmond Heights man, 35, was found in possession of $129.92 worth of stolen food. He was summonsed on a shoplifting charge.

At 10:20 p.m. Aug. 29, a driver struck a utility pole at Green and Cranlyn roads. Police investigated and learned that the driver, a Cleveland man, 68, was intoxicated. The man was charged with OVI and taken to the hospital.

At 3:30 p.m. Aug. 30, police were dispatched to a home where a woman, 39, reported that her ex-husband, 32, assaulted her and her son, 17. Police arrested the Cleveland man Sept. 1 and charged him with domestic violence and assault.

At 10:50 a.m. Aug. 30, police responded to a report of shots fired. Officers learned that a Cleveland man, 18, had shot another Cleveland man, 21. The suspect fled the home before police arrived. The victim was taken to the hospital for treatment of his injuries.

At 8:25 p.m. Aug. 31, a woman, 23, reported that her husband, 36, who resides in Cleveland and who had been drinking, yelled at her and restrained her. The man also broke a dish while in the woman’s home. Police charged the man with domestic violence.

At 11:55 p.m. Sept. 3, police arrested at a residence a man, 25, of Warrensville Heights. The man had pushed and grabbed a Shaker Heights woman, 21, who is the mother of his child.

The suspect, who was charged with domestic violence, was also found to be in violation of a temporary protection order.

At 8:40 a.m. Sept. 3, a woman, 33, reported that someone damaged two vehicles that were parked in her home’s driveway and stole a license plate from one of the cars.