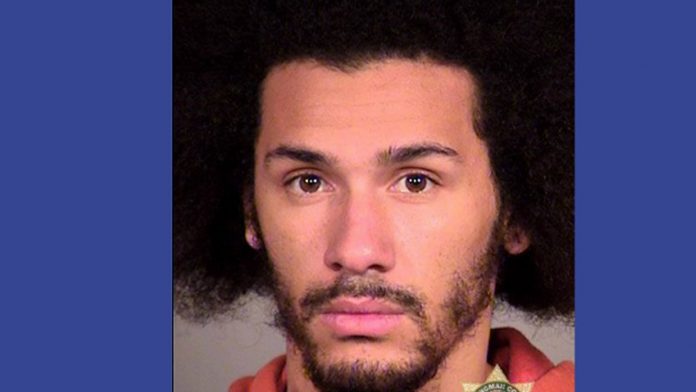 PORTLAND, Ore. (KOIN) — A man accused of brutally attacking a pickup driver near a protest in downtown Portland earlier this week is in custody after turning himself in to detectives, according to authorities.

He faces felony charges of assault II, coercion and riot. It’s unclear when he’ll be arraigned.

“I am pleased the suspect in this case turned himself in and appreciate all of the efforts to facilitate this safe resolution,” Portland Police Chief Chuck Lovell said in a statement. “Thank you to all of the members of the public who have provided information and tips to our investigators. Your assistance is very much appreciated.”

Police say investigators were also able to identify a witness to the assault who had been previously sought.

Love is accused of kicking a man in the head and knocking him unconscious following an incident Sunday night. The assault was caught in videos posted to social media, and police announced they were looking for Love on Tuesday.

Officers found the victim, who had been driving a white pickup, lying in the street unconscious and bleeding. The victim, whose name is Adam Haner, is recovering at home from his injuries.

The attack drew widespread condemnation from city and county leaders.

“The actions depicted in these videos are universally rejected as wrong – and the actions are illegal. I condemn this violence,” Multnomah County District Attorney Mike Schmidt said in a statement on Monday. “Assaults on community members and police officers undermine everything our community is doing to bring meaningful and lasting change to the criminal justice system and beyond.”

Authorities say their investigation into the assault is ongoing.

Anatomy of a protest: How a Laramie march became a movement

The Honda Ridgeline Is An Underrated Pickup Truck… Here’s Why