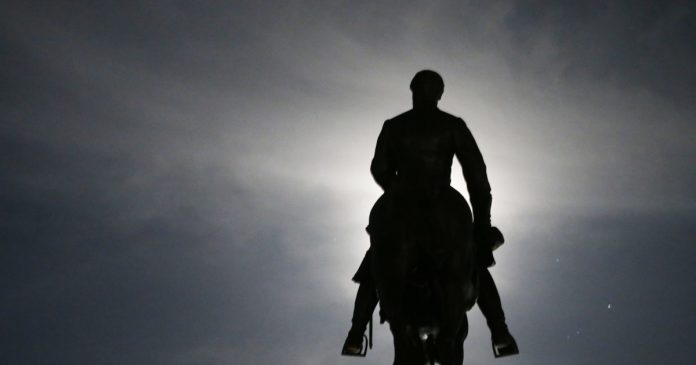 RICHMOND, Va. — One person was arrested and charged with possession of a firearm by a convicted felon following an early-morning incident on Friday at the Lee monument on Monument Avenue.

“Richmond Police Department officers in the area of the Robert E. Lee circle [at about 12:55 a.m. Friday] observed individuals in the traffic lanes dismounted with their bicycles. Several pick-up trucks approached them. Words were exchanged between the individuals and the drivers of the pick-up trucks,” a Richmond Police spokesperson said. “One pick-up truck sped off and then another pickup truck ran over a bicycle while fleeing the area.”

“The traffic stops revealed multiple assault-style rifles, handguns, ammunition, and body armor,” a Richmond Police spokesperson said. “Three assault-style rifles and one handgun were seized.”
Police have not yet released the name of the man officers arrested, but said additional charges may be filed pending the outcome of the investigation.

The man who said he was struck and that his bike was damaged spoke with WTVR CBS 6 reporter Cameron Thompson Friday afternoon.

“When I was holding my bike [one truck] ran up onto the monument and they ran over my bike like literally there’s nothing I could do.” the man, who spoke with WTVR CBS 6 on the condition of anonymity, said. “The only thing I could do was jump out of the way. The car hit me right here, as you can see scars and stuff… and that’s when I kind of pushed off of it and jumped out of the way.”

The man said the truck “rolled over” his bike “like it was nothing.

“I’m bikeless,” he said. “That’s my mode of transportation…. I literally have nothing now to get around the city with.”

The man also said that about 25 officers made him and others move several vehicles that were blocking them and traffic.

“After they asked us to move those cars and we got hit, only two officers came out to check on us,” the man said.

One witness to the scene spoke with CBS 6 reporter Matthew Fultz, Friday evening.

‘They came out for fear. We’re out here because we’re not afraid, that’s the big difference,” the witness said.

Despite what happened, the man has no plans to stop protesting and hope police continue the investigation they promised.

The victim said he plans on filing an IA complaint against the officers that made them move their cars before the incident.

Detectives have been in touch with the victim Friday and continue to investigate.

If you see breaking news, and can do so safely, shoot a photo or video and send it to CBS 6. You can also upload photos to our Facebook page or email pics@wtvr.com from your phone.

Pickup Truck Left Hanging Over Highway 297A Bridge In Collision :...