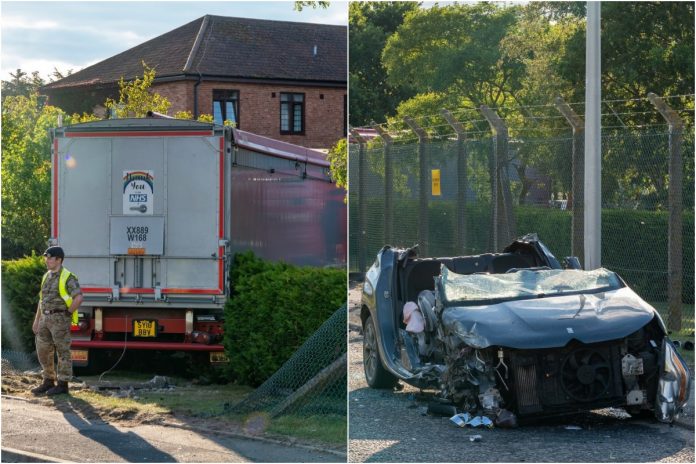 A MAN was cut free from a smashed car outside a Scots army barracks this evening, as horrifying pictures show the extent of the dramatic crash.

The emergency services raced to the scene in Kinloss , Moray, earlier today at around 4.20pm after a road smash between a lorry and car.

Snaps show the mashed up car lying at the side of the road, while the truck crashed through the Kinloss Barracks’ security fence and nearly hit into a nearby building.

Nobody was injured from the incident but fire crews had to cut a man free from the motor before he was taken to hospital as a “precaution”.

And now, cops are launching a full investigation into the crash as the road remains sealed off.

A Police Scotland spokeswoman said: “Around 4.20pm, on Monday, 31 August, we received reports of a two vehicle crash involving a truck and a car on Main Road, Kinloss just outside the Kinloss Barracks.

“A 52-year-old man was taken to Dr Gray’s Hospital as a precautionary measure.

“The road is currently closed and diversions are in place. Inquiries into the circumstances are ongoing.”

A Scottish Fire and Rescue spokeswoman added: “We were called out to a RTC involving a heavy goods vehicle and a car.

“We used hydraulic cutting gear to cut the roof of a car and free one male casualty, who was left in the care of the ambulance service.

Meanwhile, earlier today we told you a biker was left seriously injured after a road smash involving three motorbikes and a Range Rover.

Woman, 23, fighting for life after ‘murder bid’ in Fife woods

The man, 32, was rushed to hospital after the smash on the A84 near Lochearnhead at 6pm on Sunday.

Emergency services raced to the scene after the collision with one biker taken to the Queen Elizabeth University Hospital in Glasgow with serious injuries.

There were no other serious injuries after the horror smash.