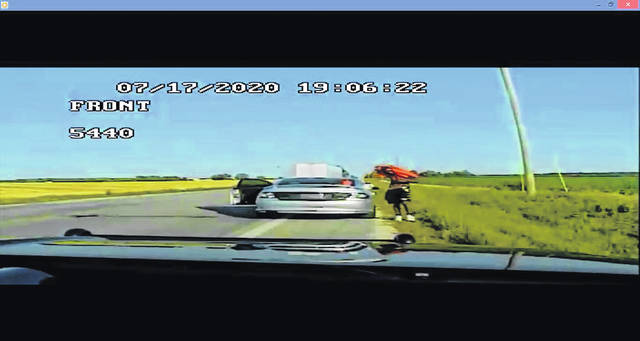 CELINA — A Cincinnati man died by suicide Friday after a series of crimes in Indiana and Ohio.

The Mercer County Sheriff’s Office said that Raepheal A. Dell, 22, shot himself in the head with an AK-47 after being confronted by a Mercer County deputy along a roadway.

Dell was a suspect in a burglary/robbery in Fort Wayne, Indiana, where the victim of the robbery was shot. He was also a suspect in a second robbery in Van Wert County. During the escape from that robbery, a person who tried to stop Dell’s escape was dragged by the car as the suspect left the scene.

Because Dell stole a cell phone in Van Wert, authorities were able to pinpoint him to the St. Marys area.

A Mercer County Deputy, Spencer Heinl, found Dell just after 5 p.m. Friday at the intersection of U.S. Route 33 and Kuck Road, just east of Neptune. Dell was using a gas can to put gas in a car he had stolen earlier in the day out of Kosciusko County, Indiana. When the deputy approached and activated his overhead lights, Dell entered the car and, a few seconds later, ended his life.

Dell had been released earlier in the day from the Kosciusko County Jail. After Dell ran out of gas at U.S. Route 33 and Kuck Road, he tried to commandeer a pickup truck that stopped, but the truck left the scene.

Another vehicle stopped to help shortly afterward, and he was able to get into that vehicle. He instructed the female driver to drive to TSC and purchase a gas can. She entered the store alone and was noted to be upset. After that, they purchased fuel at the Shell station in St. Marys and made their way back to the stolen car that ran out of gas.

Mercer County investigators would like to speak with the driver and occupants of the pickup truck as well as the woman who drove to the TSC to buy the gas can and gas. They are not suspected of doing anything wrong, but officers would like to understand the situation better.

Those struggling with mental health should call the National Suicide Prevention Hotline at 800-273-8255.

In this screen grab from a law enforcement video, Raepheal A. Dell, 22, reacts to an officer pulling up.