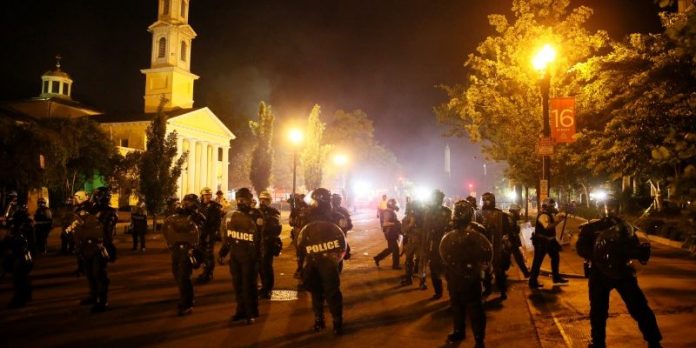 Minneapolis: A tanker truck drove into a throng of protesters on a closed interstate near Minneapolis on Sunday, with the driver pulled from his rig and beaten, as major US cities imposed curfews in fear of another night of demonstrations against police brutality descending into violence.

It did not appear that any marchers were struck by the truck as it moved through the crowd on the westbound lanes of Interstate 35, honking. The freeway was closed to traffic at the time.

A Reuters witness said the truck driver was dragged out of the cab of his tractor-trailer rig and beaten by protesters before he was taken into custody by Minneapolis police. A Reuters photo showed him shirtless and covering his face as he stood next to a police officer.

“Very disturbing actions by a truck driver on I-35W, inciting a crowd of peaceful demonstrators,” the Minneapolis Department of Public Safety said on Twitter. “The truck driver was injured & taken to a hospital with non-life threatening injuries. He is under arrest. It doesn’t appear any protesters were hit by the truck.”

The incident marked the latest outburst of violence following what began as peaceful demonstrations over the death of George Floyd.

Floyd, an unarmed black man, died last Monday after a white Minneapolis police officer knelt on his neck, sparking outrage that has swept across a politically and racially divided nation.

Protesters have flooded streets after weeks of lockdowns during the coronavirus pandemic that threw millions out of work and hit minority communities especially hard.

People attend a protest amid nationwide unrest following the death in Minneapolis police custody of George Floyd, in Miami, Florida, US, May 31, 2020. Photo: Reuters/Maria Alejandra Cardona

As demonstrators broke windows and set fires on Saturday night, police fired rubber bullets and tear gas to disperse crowds in many cities. In some cases, bystanders and members of the media were targeted.

In one video from Minneapolis on Saturday, a National Guard Humvee rolled down a residential street followed by what appeared to be police officers wearing tactical gear. An officer ordered residents to go inside, then yelled: “Light ’em up” before shooting projectiles at a group of people on their front porch. The city’s curfew does not apply to residents outside on their private property.

In New York City, police arrested about 350 people overnight and 30 officers suffered minor injuries. Mayor Bill de Blasio said police conduct was being investigated, including widely shared videos showing a police sport utility vehicle in Brooklyn lurching into a crowd of protesters who were pelting it with debris.

De Blasio said he had not seen a separate video showing an officer pulling down the mask of a black protester who had his hands in the air, then spraying a substance in his face.

The closely packed crowds and demonstrators not wearing masks sparked fears of a resurgence of COVID-19, which has killed more than 100,000 Americans.

Philadelphia on Sunday moved the city’s curfew earlier, to 6 pm (2200 GMT) from 8 pm, and ordered all businesses to close as local TXF-TV showed images of groups of protesters attacking police cars, setting one on fire. Other people went into nearby stores and came out with armfuls of merchandise.

The District of Columbia imposed an 11 pm curfew after two nights of clashes between police and protesters near the White House.

Protests also flared in Chicago, Seattle, Salt Lake City, Cleveland and Dallas, where rioters were seen on video beating a store owner who chased them with a large machete or sword. Police said on Sunday he was in stable condition. 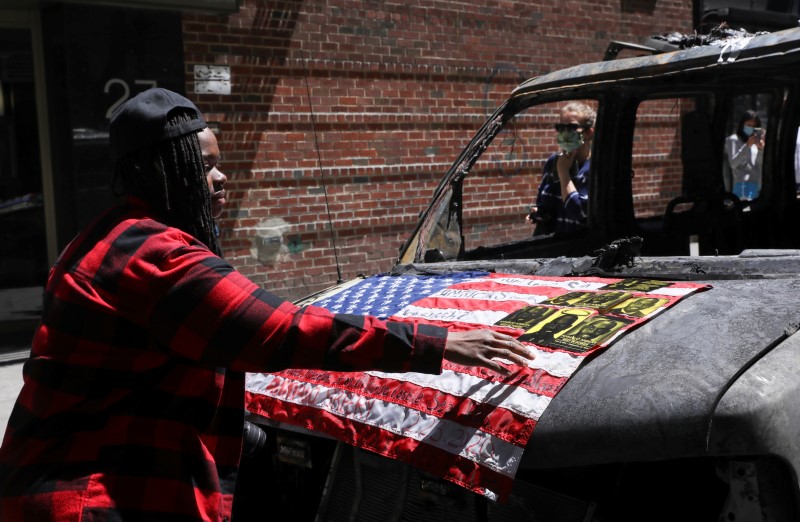 A woman lays a flag on a burned NYPD van during nationwide unrest following the death in Minneapolis police custody of George Floyd in Manhattan, New York, US, May 31, 2020. Photo: Reuters/Caitlin Ochs

The clashes in Minneapolis marked the fifth night of arson, looting and vandalism in parts of the state’s largest city, and its adjacent capital, St. Paul. The state’s governor said on Saturday that he was activating the full Minnesota National Guard for the first time since World War Two.

Thousands of people gathered peacefully on Sunday afternoon for a rally in St. Paul as state troopers surrounded the state capitol building. About 170 stores in the city have been looted, its mayor told CNN.

“There is no real one answer but the beginning is we have to learn to be honest with each other,” said 66-year-old community activist Philip Holmes as he stood among demonstrators holding “Black Lives Matter” signs.

In Santa Monica, California, on Sunday, hundreds of protesters marched peacefully down Ocean Avenue, parallel to the city’s famed beaches. A line of police officers stood at the entrance to the Santa Monica Pier, local KTLA-TV said.

Several hundred demonstrators marching through downtown Miami stopped between the federal courthouse, FBI offices and the federal detention centre chanting: “No justice, no peace.” Inmates could be seen in the narrow windows waving shirts.

While covering the protests in Minneapolis on Saturday night, two members of a Reuters TV crew were hit by rubber bullets and a Reuters photographer’s camera was smashed as attacks against journalists covering civil unrest in US cities intensified.In response to the protests, Target Corp announced it was temporarily closing 100 stores, about 30 of them in Minnesota.

The administration of President Donald Trump, who has called protesters “thugs,” will not federalise and take control of the National Guard for now, national security adviser Robert O’Brien said on Sunday.

Trump said on Sunday that the US government would designate anti-fascist group Antifa as a terrorist organisation. It was not clear how many of the protesters participating in demonstrations are from Antifa.

“Get tough Democrat Mayors and Governors,” Trump said on Twitter on Sunday afternoon. “These people are ANARCHISTS. Call in our National Guard NOW. The World is watching and laughing at you and Sleepy Joe. Is this what America wants? NO!!!”

“Sleepy Joe” is Trump’s nickname for Democrat Joe Biden, his presumptive rival for the presidency in the November election.

The arrest of Derek Chauvin, the police officer seen kneeling on Floyd’s neck, has failed to satisfy protesters. Three officers who stood by as Floyd died have yet to be charged.