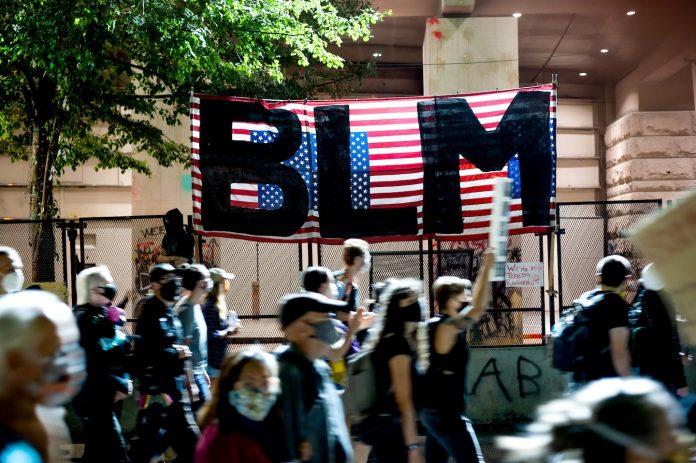 “The report said protesters were chasing the truck before it crashed, and they assaulted the driver after the crash,” Sgt. Kevin Allen told The Washington Post in a statement early Monday. “The driver was transported to the hospital by ambulance with serious injuries.”

Police released additional information Monday afternoon, saying that people surrounded the truck after it crashed, approached the driver and “drug him out of car.” Investigators also learned that “the victim may have been trying to help a transgender female who had some of her thing stolen,” police said. Police have not identified the woman and have not been in contact with her.

A Portland police spokesman added on Monday that the victim suffered non-life-threatening injuries and was recovering in an area hospital.

Videos shot just after the truck crashed show a small group of people confronting the driver, pulling him away from the vehicle and slamming him to the ground. They told him to stay seated until police arrived, and the man appeared to mostly comply with that demand.

One graphic video posted on Twitter shows a man running up to the driver and kicking him in the head, apparently knocking him unconscious. Another person grabs the assailant and pulls him away as people nearby shout for a medic and tell someone in the area to call 911.

Police arrived at the scene and encountered a “hostile crowd,” Allen said. Officers in riot gear cleared the area and secured the scene, where a white pickup truck without license plates had been left partially on the sidewalk with a smashed front bumper.

Earlier in the evening, social media rumors had swirled about a person driving erratically downtown, allegedly trying to strike protesters, although no evidence to support those claims has surfaced. Tensions in Portland were already heightened this weekend after far-right extremists came to the city and allegedly fired a gun on Saturday afternoon.

A driver nearly ran into protesters in Portland on Aug. 4, when a pickup accelerated toward a crowd and collided with a motorcycle that had been used as a barricade between demonstrators and oncoming traffic.