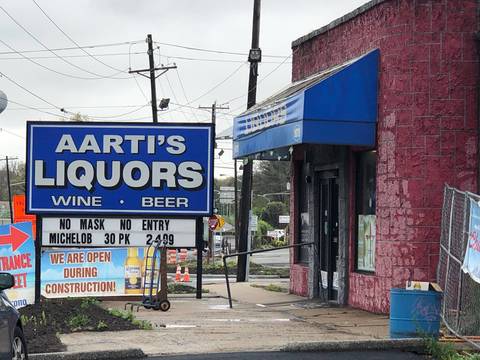 UNION, NJ – A man, kicked out of a Union liquor store for not wearing a face mask, is being sought for striking two employees with a U-Haul truck in retaliation, Union police say.

A 9-1-1 call was received by police Wednesday night at about 8:00 from an employee at Aarti’s Liquors at 1675 Route 22 West.  Upon arrival, officers found two injured employees in the parking lot.  Police say their investigation found that a customer entered the store without a mask as required by current health guidelines.  The employees advised the man he was required to wear a mask in their store or leave.  The man threatened the employees and left the store.

Police say two of the workers went outside “to see if they could get a license plate of the car the man arrived in for future reference in case there were problems”.  According to police, the man got into a U-Haul truck and struck both of the employees as they stood in the lot.  The U-Haul then fled onto Rt. 22.  The two injured workers were taken to Trinitas Medical Center by ambulance for further evaluation.  According to police, the employees believe this was an intentional act and not an accident.  The injured workers did get a possible license plate on the U-Haul truck.

Police say the man in question was described as a dark skinned African American in his late twenties. Detectives are following up on the possible license plate and will be following up all leads.  Anyone with information on this crime can speak to detectives at 908-851-5030.  All calls will be kept confidential if needed.