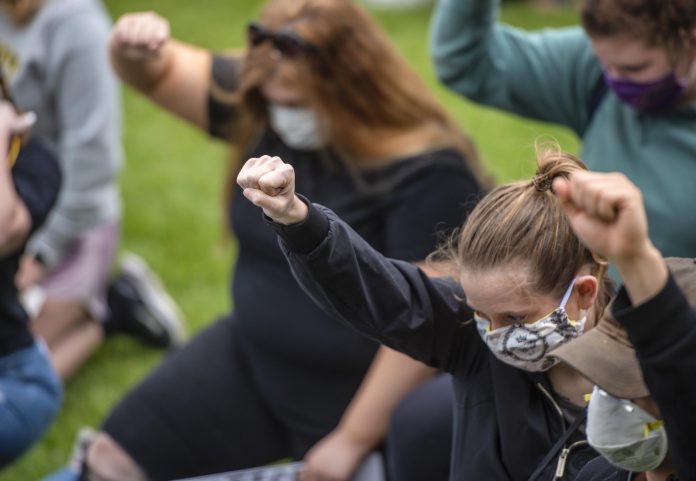 MANCHESTER — Police are investigating a report that a man drove a truck through a roundabout where protesters were kneeling in the road on Sunday afternoon.

Protesters had taken to the roadway at the intersection of Depot and Main streets to kneel for 8 minutes and 46 seconds, the amount of time that Minneapolis police officer Derek Chauvin knelt on George Floyd’s neck, causing his death last month.

The event in Manchester was one of many Black Lives Matter protests around the state last weekend. Manchester police did not have an estimate on the crowd’s numbers or the number of people who were kneeling in the roadway. Protest organizer Nancy Diaferio said there was about 50-60 protesters there at noon, and Facebook accounts indicate more people joined in over the afternoon.

The act stopped traffic on all three sides of the intersection, but a pickup truck reportedly passed other stopped cars and drove into the roundabout.

Manchester Police Officer Ryan Matteson said the department is investigating the incident and looking to gather media and statements from witnesses, who largely scattered after the incident.

Diaferio had not heard about the incident Monday morning, but asked other protesters in a public Facebook page called Northshire Community Forum whether they had seen the truck.

Several protesters confirmed that they had seen a white truck drive into the kneeling crowd. Others cited an incident that occurred earlier that day in which a man drove in three circles around the roundabout with his middle finger raised to the protesters, who remained on the sidewalk at that time.

Matteson said Manchester police have been trying to provide spaces for civil civic discourse, but that they don’t encourage anyone to “break the law by blocking traffic.”

“As a motorist, you still have to operate with due regard for hazards in the roadway,” Matteson said. “So that’s what we’re trying to figure out right now, whether any crimes were committed.”

VTDigger is underwritten by:

Matteson added that the department is encouraging protests and activism within the town.

“We also want to see accountability,” he said.

Stay on top of all of Vermont’s criminal justice news. Sign up here to get a weekly email with all of VTDigger’s reporting on courts and crime.