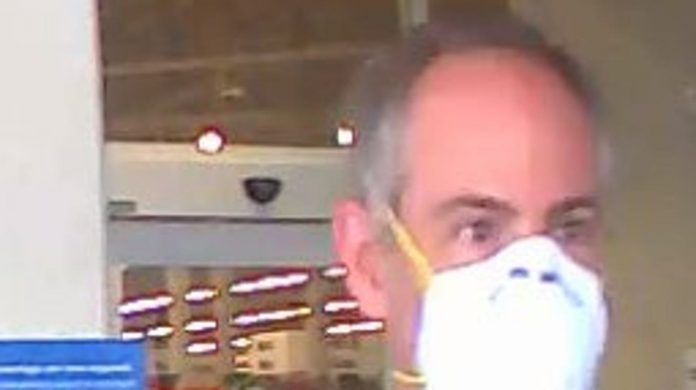 Police are seeking a man they believe may have taken photos under a woman’s skirt at a Meijer store in Oakland County.

Crime Stoppers is offering a reward up to $1,000 for information in the incident Aug. 11 at the store at 1703 Haggerty Road in Commerce Township, Oakland County Undersheriff Michael McCabe said in an email.

Police say the man followed around at least one woman while holding what appeared to be a car wash brush in the store.

When the woman bent over to pick up an item, the man put the brush under her skirt, according to a news release from the sheriff’s office. The man left in a black Ford F-150 pickup truck with a cargo carrier on the hitch.

The incident was captured on surveillance footage, police said.

The suspect is described as a white man believed to be in his 50s, who was balding but had gray hair.

An image provided by police shows he was wearing a blue T-shirt with a logo on the front of the state of Michigan encircled by red and white.

He was wearing a white N95-type mask, police said.

Those with information on the incident can remain anonymous and are asked to call Crime Stoppers at 800-SPEAK-UP.

Autoworkers Are Returning as Carmakers Gradually Crank Up Factories