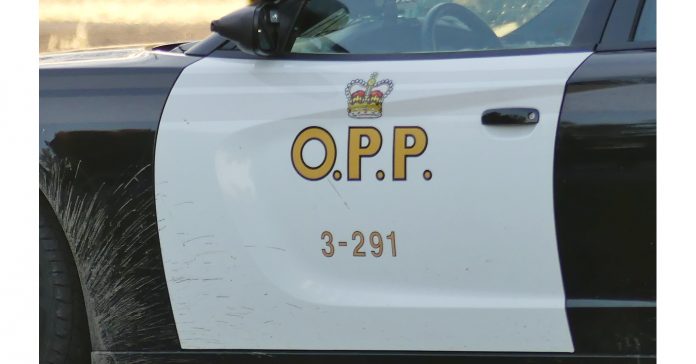 SOUTH GLENGARRY — A man who allegedly threatened another man as he rode a bike on County Rd. 2 now faces a number of serious charges.

According to the detachment, a verbal altercation ensued when the accused told the victim he could not pass through the area and brandished an “edged weapon.” The aggressor then fled but was later picked up by police.

The SD&G OPP report the arrest of McLean Brownlee, 28, of Cornwall, in connection with the incident. He’s charged with assault with a weapon, uttering threats, possession of weapon for dangerous purpose, carry concealed and unauthorized possession of a weapon. Held for bail, Brownlee is scheduled to appear later in Cornwall court.

The matter represents just one of the 364 calls for service the detachment dealt with between Aug. 27 and Sept. 3.

SOUTH DUNDAS — A traffic violation led to the apprehension of a driver who was unlawfully behind the wheel and in violation of his probation order, according to the SD&G OPP.

An officer and a member of the Community Street Crime Unit stopped the vehicle shortly before 11:10 a.m. on Aug. 28 — and discovered the driver was disqualified from driving as a result of prior driving-related offences. He was also breaching previous release conditions.

North Dundas resident Willian Wickholm, 36, was arrested, according to the detachment.

He’s charged with two counts of failing to comply with conditions of a probation order, driving under suspension, operating a motor vehicle with no insurance, and failing to apply for permit on becoming owner. Wickholm was released to appear Nov. 3 in Cornwall court.

NORTH GLENGARRY — A traffic complaint in North Glengarry led to the of the 51-year-old motorist on a number of counts.

SD&G OPP officers responded to the Aug. 29 complaint shortly after 8:30 p.m. They located the vehicle and found the driver to be “uncooperative.” The man behind the wheel was under the influence of alcohol and in possession of an “edged weapon,” according to police.

The detachment reports the arrest of Gerald McGarrity, 51, of North Glengarry, in connection with the incident. He’s charged with alcohol-impaired driving offences, along with unauthorized possession of a weapon and operation while prohibited.

The accused was released from custody to appear Nov. 10 in Cornwall court.

Found to be in breach after South Dundas domestic

SOUTH DUNDAS — A 50-year-old South Stormont man is charged with two counts of failing to comply with his previous release conditions.

He was arrested after SD&G OPP officers responded to an Aug. 29 domestic call in South Dundas around 9:35 p.m.

The accused was held for bail, to appear later in Cornwall court.

NORTH DUNDAS — A 21-year-old South Dundas man is charged with break and enter, plus two counts of mischief and three counts of failing to comply with his previous release conditions.

The trouble began with a North Dundas domestic situation after midnight on Aug. 30 in which the accused damaged the victim’s property, before fleeing and breaking into an unoccupied home on the same road. SD&G OPP officers apprehended him at the second address.

He was held for bail, to appear later in Cornwall court.

NORTH DUNDAS — Multiple power tools, a Honda generators and a quick-cut Stihl saw were stolen from a trailer at a Cameron Rd. residence sometime overnight on Aug. 31-Sept. 1.

The SD&G OPP responded to the theft shortly after 12:30 p.m. the next day and continues to investigate.

SOUTH GLENGARRY — A 20-year-old alleged car thief from Quebec was apprehended after gas was stolen from the eastbound ONroute station on Highway 401.

SD&G OPP officers responded to the fuel theft shortly before 6:50 p.m. on Sept. 1, pulling over the fleeing vehicle on the 401 in South Glengarry. The 2016 Toyota 4Runner — from Toronto — turned out to be stolen. The driver, who was arrested, also possessed stolen credit cards.

According to the SD&G OPP, Kyel Vilmond, 20, of Laval is charged with possession of property obtained by crime over $5,000; possession of credit card; theft under $5000; fail to comply with probation order; and driving a motor vehicle without a licence.

Vilmond was released to appear later at the Ontario Court of Justice.

NORTH GLENGARRY — A pickup truck was stolen from a property on Little Third Rd., North Glengarry.

They sell trucks against all odds – Truck News

10 Most Outrageous Pickup Trucks Ever Produced