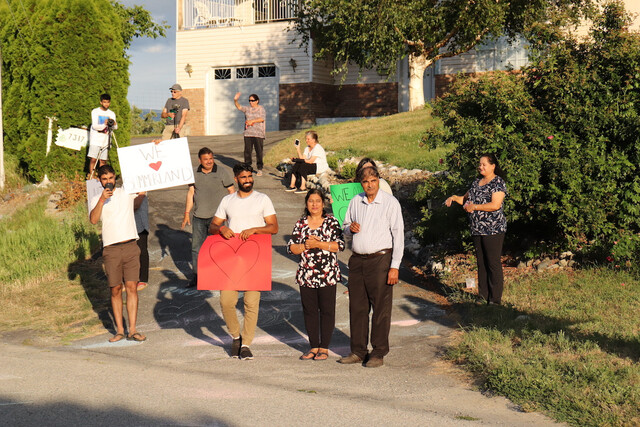 The Lekhi family during Thursday’s parade.

Summerland mayor Toni Boot acted quickly when she found out where the confederate merchandise was purchased from and confronted the store owner Saturday, destroying all the items from the store.

“I decided this morning that maybe I needed to buy up all of whatever merchandise [had] the confederate flag,” Boot said.

Allan Carter, owner of Your Dollar Store with More, stated he pulled all of the bandanas after hearing about the incident using it as a flag during the drive-by parade.

“We’ll never carry them again. We didn’t think it was a problem, like I said we sell all types of different bandanas,” Carter said.

“We’re sorry it happened and in hindsight we shouldn’t have ever had those bandanas on the floor.”

Both Carter and Boot mentioned that their interaction with one another was not agreeable, however they were able to come to a decision to give the Mayor the items since he was no longer selling them.

“I realize that this is a bit of he said, she said,” Boot said. “I can be described as small but mighty.”

Boot stated that her choice to destroy the confederate merchandise in front of the store could be perceived as over the top, but hopefully over the top positive after the “over the top negative issues were happening.”

“I could make a very clear statement that this is not acceptable in Summerland,” Boot said. “I feel that this is the time to speak out on behalf of the community.”

An Alberta man who waved a Confederate flag during an anti-racism parade in Summerland this past week has apologized to the district’s mayor.

Monday night, an Indo-Canadian couple in Summerland woke to their window being smashed, and they later found racist graffiti, including swastikas, covering the outside of their home. Thursday night, hundreds of Summerland residents participated in a parade outside the family’s home, to show support and stand up against racist behaviour.

While the parade was largely a positive event, a man was spotted waving a Confederate flag outside of his truck as he drove by, sparking condemnation from Toni Boot, Summerland’s mayor.

Police in Summerland found the man responsible late Friday, and the man told police he wanted to apologize to Boot for his actions.

“I went and a had a chat with him and it was a good talk,” Boot said Saturday, following her meeting with the man.

“At one point he kind of pushed back a little bit, and I said ‘I don’t care how many of your friends have a Confederate flag on their trucks and think it’s OK. It’s not OK in Summerland.”

Boot says the man was in town visiting friends, but lives in a small, rural area outside of Edson, Alta. He’s headed back home Sunday morning.

“He was quite apologetic and very respectful. He’s certainly given his full cooperation to the police,” Boot said.

“At the end of our conversation, I said you guys are welcome to come back to Summerland … and enjoy everything our community has to offer, but if you think you’re going to come back with a Confederate flag or anything of hate in this community, don’t even bother, because this community will not stand for it.”

The man told Boot he was not aware the purpose of the parade was to push back against racism, or that the Confederate flag represents racist ideals. But Boot says she “doesn’t believe that for a second.”

Boot did not know if the man also apologized to the Lekhi family.

The man actually bought the flag in question in Summerland, and Boot says she’s going to “have a chat with that business owner.”

Despite the incident with the flag, Boot says the parade was a success.

“Nothing will take away from that incredible show of support for the Lekhi family,” Boot said. “It really shows that, while there is racism in our town, we’re not a racist town. I’m hoping we’ll see a lot more of this in the future, in terms of people wanting to talk about this and pushing back against this.

“We’re not going to allow this in our community … whether it’s against an Indo-Canadian family or somebody else of colour. It’s time to address this and start healing the community.”

A GoFundMe page has raised more than $16,000 to create some kind of mural or art piece, or perhaps multiple ones, that celebrates diversity in the community.

Stocking a tiny grocery store during coronavirus: ‘Wow, they have stuff’