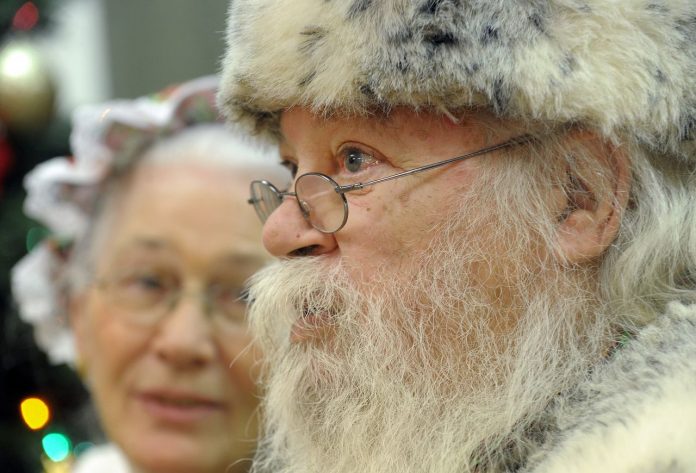 Santa A. Claus, of South Side Easton, has died after decades of brightening the holidays for children with their eye on that certain so-and-so for Christmas.

That was really his name. He told lehighvalleylive.com back in 2014 he’d tried to get it changed beginning in 1986, and finally succeeded in 1995 with help from then-state Sen. Roy Afflerbach.

“We all went to Harrisburg and his name was changed to Santa A. Claus,” his sister, Colleen DeFelice, said Saturday. She’d just been looking through a scrapbook about his life and found a quote in one of the stories about him saying he did it, “because nowadays everybody asks for ID and children do, too.”

He was the Santa Claus for 18 years at the Concord Mall in Wilmington, Delaware, then played the part at Main Street Commons in Bethlehem, which used to be Orr’s. He’d been the Orr’s Jolly Old Elf, too, in addition to stints at the Lehigh Valley Mall and Hess’s in Allentown. He was the first Santa when the Mall of America opened in Minnesota, his sister said, and worked at the Monmouth Mall in New Jersey, too.

His wife of 58 years, Dolores, portrayed Mrs. Claus at his side, and her name really does show up as Dolores S. Claus in public records.

Santa A. Claus was born and raised in Catasauqua, and he and the Mrs. lived for the past few years on East Kleinhans Street in Easton.

DeFelice lives in Florida and said she got the call Wednesday afternoon that he’d taken a turn. He’d been ill for the past three years, and no longer able to lend an ear to children at Christmastime, she said. She took the first flight to Pennsylvania and was with him and his family when he passed at home.

“The official time was 12:25” Thursday afternoon, she said. “He believed in magic.”

Santa A. Claus’ obituary tells of a full life, with many jobs outside the holidays: Truck driver, contractor, Mack Trucks laborer.

DeFelice said she didn’t know much about his having been “responsible (for) and participated in raising a sunken barge which was used on the Lehigh Canal,” to quote a line from his obituary.

After 9/11, he knew of the family of one of the pilots who was killed and made special arrangements for his children to visit with him privately and for the store merchants to donate gifts, DeFelice said.

“We’re getting phone calls,” she said Saturday of his fans: “There were families that two-three generations, they came as children, they brought their children and now they’re bringing their grandchildren. One of the messages we received was, ‘He was the only Santa my children know.’”

The obituary — perhaps with a wink — lists his age as unknown, but DeFelice said she’s four years younger than him and public records say he turned 80 in March.

Services are this week.

Our journalism needs your support. Please subscribe today to lehighvalleylive.com.

Why get a pickup truck amid the pandemic

Trends of Truck Telematics Market Reviewed for 2020 with Industry Outlook...